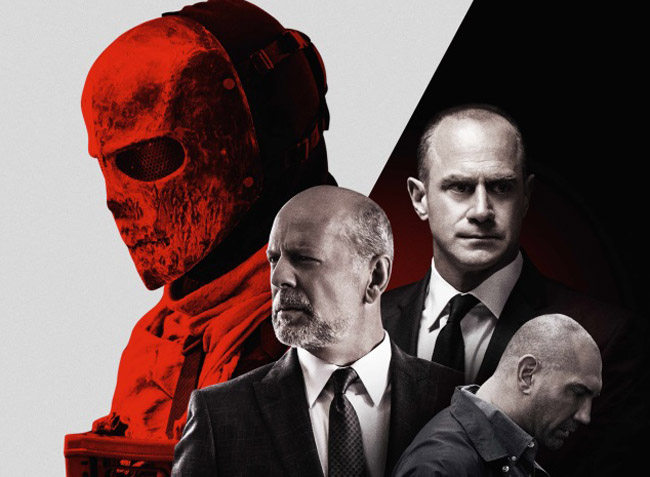 In an ideal world, every movie would start with at least a wee spark of creativity.  But we don’t live in an ideal world – and, in case we need a reminder, there’s Marauders ……

Working out where the original idea for the film came from is a thankless task because it looks more likely that there wasn’t one in the first place.  It’s more a mish-mash of leftovers from other movies, with a helping of seasonal irony on the side.   The big bank heist at the start, which involves a gang in scary masks and with a liking for technology has strong echoes of Triple 9.  It’s the first of a series of raids and the FBI agents trying to crack the case are hell bent on proving that the owner of the banks, Hubert (Bruce Willis) is the brains behind it all.  But, hey, that would be far too easy!

If that all sounds familiar, that’s because it is.  We’ve seen all this before, the so-called characters and the clichés.  And if that was all that was wrong with the film, you could easily dismiss it as a Friday night B movie.  But it gets worse because it’s downright incompetent and leaves a nasty taste in your mouth.  It’s been made at least ten years too late.  It might have just about passed muster in 2006, but its relentlessly macho tone, the token woman detective who has precious little to do except be the target for FBI agent Dave Bautista’s sexist comments and the inevitable homophobic jibes when one of the main characters is found to be in a gay relationship simply doesn’t cut it with today’s audiences.

Director Steven C Miller attempts to introduce an element of film noir with the almost constant Cincinnati rain – or perhaps he had the original Blade Runner in mind.  Either way, you’d think the cast would wear trenchcoats, but they seem to prefer posturing, some occasional slo-mo action and generally getting soaked.  None of it works.

Top billing, for what it’s worth, goes to Christopher Meloni (TV’s Law And Order: Special Victims Unit) who is back in cop mode, but this time a bad mouth, badass version.  He can do this type of role in his sleep – he played it on TV for 12 years – and even a back story about his wife being killed by a drug dealer doesn’t succeed in making him more sympathetic.  It’s based on the assumption that we’re interested in the first place.

Willis appears in little more than half a dozen scenes.  He appears, postures, sneers and delivers his lines in such a wooden fashion that the floor is covered with splinters.  He introduces himself by delivering a bizarre speech about a spider climbing up the outside of the building: not so much Incy Wincy Spider, more something in the style of Eric Cantona during his “seagulls following trawlers” period.  Entourage’s Adrien Grenier looks just plain bored throughout, making you hope that his TV alter-ego’s career is being managed better than his, and you have to doubt the wisdom of letting Dave Bautista loose on dialogue, regardless of its standard.

Is there anything good about it?  Presumably, the cast were happy enough with their pay cheques, but after that, it’s difficult to find anything worth recommending.   As Bautista says early on, “Welcome to the shit show.”  You’ve been warned.

Marauders is in cinemas and on digital now.