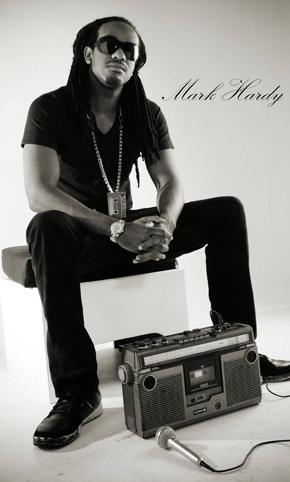 Born in Trinidad and Tobago, singer, songwriter and producer Mark Hardy is an up and coming Dancehall artist who is all about keeping his music fresh and positive. From performing on television at just 12 years old to forming his own group “Breathless Krew,” Mark Hardy has always had a deep passion for music. Now venturing into a career as a solo artist, Mark has big plans for the future.

How did you get into Dancehall music?
To tell you the truth, I just fell in love with its energy and vibe. I guess it sounds a bit strange coming from the land of Steelpan and Calypso, and I’ve definitely centered some of my music around a carnival sound, but Dancehall music just naturally appeals to me.

Does your music have a message?
Each song I write definitely carries its own message. My music is a reflection of my experiences throughout my 25 years of existence. For example, my first single “Turn It Up!” is a club song, which simply put, is about encouraging everyone to have a good time in a party environment. Other upcoming singles such such as “Gone” and “Lyrical Apology” deal with relationships and allows the listener to experience a break up situation from a guy’s perspective. I try my best to keep my music positive but at the same time very honest and true to myself as a person.

What are your influences?
I’m influenced by all types of music – I listen to pretty much everything, but I have to say that my biggest influences are 3suns, Machel Montano, The Mighty Shadow, Shaggy, Damian Marley, Vybz Kartel, Bounty Killer and Busy Signal.

Do you have any interests other than music?
Sports and fashion. My favorite sports are basketball, boxing and football. I recently got into watching American Football, it’s a pretty intense sport. Fashion is something I also have a passion for, actually I think my ex-girlfriend has something to do with that! I love to buy new clothes and sneakers and I think one day it’s possible for me to launch my own clothing line.

When did you start singing?
I’ve been singing since I was a baby. My Dad has a video footage of me playing the piano and singing nursery rhymes in my diapers! I started entering talent competitions from nine years old and soon after formed the group “Breathless Krew” but I’ve always preferred to be more behind the scenes – that’s how I started music production. I never thought I would pursue a career as a solo artist, but life is so unpredictable sometimes…

Where would you most like to perform?
Reggae Sumfest in Jamaica and a Madison Square in New York.

Do you play any instruments?
I used to play the clarinet as a kid, I actually got pretty good, but when I got more into music production I started playing the keyboard and guitar more. It’s still a work in progress, but when I have more time on my hands I’ll master both.

What hidden talents do you have?
I’ve always been told that I’m a pretty good writer and that I should get into journalism. That, and I’ve been told I have real potential as a photographer and graphic artist. But all those hidden talents are useful for my music career – especially when you don’t have the budget!

Who would you most like to collaborate with and why?
I would love to collaborate with Kanye West, Jay-Z, Alicia Keys, Lil Wayne, Pharrell and Wyclef Jean because they’re all perfectionists when it comes to music. Their dedication and love for their craft is definitely something that I respect and admire to the highest degree. Then there’s Elephant Man, Busta Rhymes and Dizzy Rascal who just love to experiment with their music and have fun whilst doing it.

What plans do you have for the future?
Right now I’m in the final year of my University LLB programme, which is Law. With my knowledge of the music industry, a career as an entertainment lawyer or consultant could be something I could really get into. I’m so passionate about Caribbean music and it’s my dream to see the entire entertainment industry progress in this field.