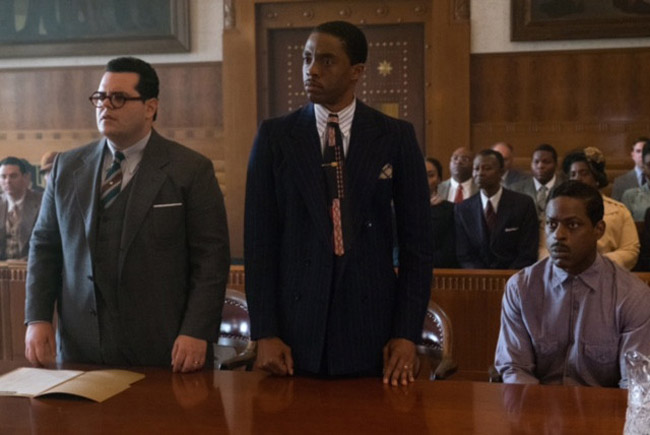 Hard hitting courtroom drama it may not be, but this biopic of Thurgood Marshall, before he becomes the first African-American Supreme Court Justice, tantalizes with entertainment as its main focus see’s the radical young Lawyer for the NAACP in one of his lesser-known cases seeking justice for the average Black American male accused of a brutal rape and attempted murder.

Whilst all the typically formulaic hallmarks of your traditional biopic sits in place, Marshall has a certain amount of charm in the unfolding of its narrative, director Reginald Hudlin keeps the proceedings light despite its blinkered and prejudice subject matter and rouses a desire to explore Thurgood Marshall and his life’s work further as it lacks just an inkling of backstory to how this great man got to the position in which we are first introduced.

Marshall (Chadwick Boseman) is sent by the NAACP to Bridgeport to represent Joseph Spell, the black chauffeur accused of raping, kidnapping and attempted murder of his employer’s wife, Eleanor Strubing (Kate Hudson) but is quickly shot down by Judge Foster (James Cromwell) from verbally presenting the case for not being a ‘local’ and proceeds to act as counsel for Josh Gad’s Sam Friedman, very much a rookie in this kind of case, especially when their client could very well be an innocent man.

Chadwick Boseman is no stranger to a biopic, after taking on the roles of James Brown in Get on Up and Jackie Robinson in 42, his Marshall is a debonair and graceful man, full of charisma and eloquence, cutting a dashing figure in a fine suit. Even when relegated to the sidelines he takes this slap in the face within his stride and with patience’s, guides Friedman in the right direction in how to present himself in court, tutoring him into asking the right leading questions. He works tirelessly to get to the bottom of the story which landed this man in court.

Gad is a little more awkward as the bumbling Friedman, his heart is in the right place, as the token white man defending a wronged black man, it’s never felt that Friedman is in anyway superior to Boseman’s Marshall, in fact, it’s the complete opposite. Being a Jewish man in at this time would have presented its own issues but any prejudices encountered are waved by without a second glance, keeping its focus very firmly on its titular character.

As an introduction to a great man, it provides an adequate entrance of education of how his life in law began, the aesthetics of the piece are easy on the eye and it never dips a heavy hand into which is still very much a timely matter of racial issues which can make it feel a little flimsy whilst not taking itself that seriously. It’s an entertaining, enjoyable watch which presents hardly any taxing on the brain.

Marshall is in cinemas October 20th