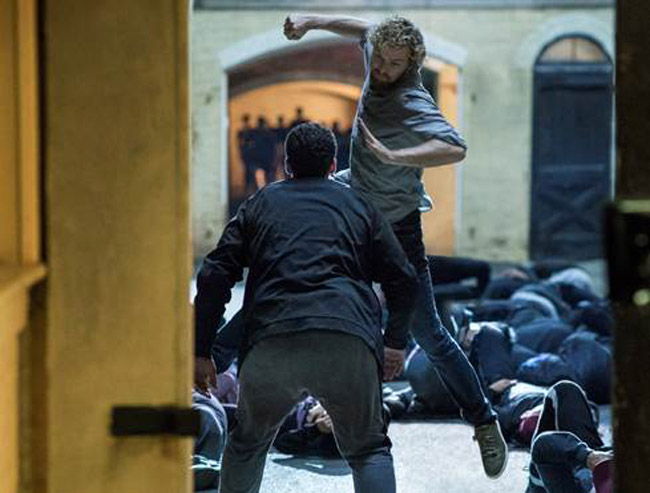 Another day, another piece of the puzzle to add to the ever-expanding Marvel Cinematic Universe. Iron Fist joins the likes of Daredevil, Jessica Jones, and Luke Cage as the next Netflix series for the studio, facing an opponent of grand proportions: expectation.

Marvel projects have a buzz around them like no other, and with the aforementioned Netflix series’ being some of TV’s latest groundbreaking work, they’re big shoes to fill. But shouldn’t we expect a certain standard from Marvel? Whether this answer is a yes or a no, Iron Fist sadly fails to reach the heights of those that came before it.

Iron Fist begins with rich and successful entrepreneur’s son, Danny Rand (Finn Jones), returning home to New York after 12 years. Presumed dead by everyone he knows and loves after being in a plane crash that killed his parents, he has a hard time convincing childhood friends Joy (Jessica Stroup) and Ward (Tom Pelphrey), who now run the company started by their and Danny’s father, who he is. But exactly who he is is slightly different after Danny has spent the last 12 years training in a monastery with the monks who discovered him in the plane wreckage. Not only does Danny have to fight for his place in his family’s company but must also face his destiny as the Iron Fist and use his mystical abilities to destroy an enigmatic group known only as The Hand.

The fundamentals for a TV show of a satisfying and enjoyable level are definitely present, a particular element that should receive praise being the pacing and narrative. From the opening moment of the first episode, the delicate balance of revelation and mystery fixes attention. The story is lead in a creative and well-thought out way, filling in potential plot holes with believable circumstances; something which many screenplays plug up half-heartedly. Answers are revealed at the rate more questions are raised, connecting the overall story in a steady and satisfying way, something with which even Daredevil has faltered. Somewhat unexpectedly, 90% of the screen time is spent in, around, or discussing the family business Rand, an interesting backbone to the plot for sure, but when revolving around a character who’s a pro at martial arts with mystical abilities, it feels like a complete misfire to be focusing on boardrooms and legal cases.

Danny only really gets into his Iron Fist suit properly at the end of the sixth episode, a long time coming considering the scattered teases of his ability not quite gaining any sort of momentum to ramp up excitement for the grand fight. By the time it comes to the main event, any likability for Danny has gone out the window. His demeanour and behaviour, especially towards martial arts master and friend Colleen (Jessica Henwick), leave barely a scrap of support for him overthrowing his enemy, and instead we’re left rooting for them to knock some humility into him. When the fight scenes do make an appearance, one can’t help but feel like we’ve been spoilt with Daredevil’s violent choreography as the combat sometimes lacks thrills that even Agents of SHIELD has reached. Colleen’s late night trips to the ring as Daughter of the Dragon are the real highlight, showing the beauty and swiftness of the art form whilst simultaneously destroying the reputation of men twice her size.

Whilst the show is not of terrible quality, it lacks where it counts and is undeniably regressive in its representation and treatment of character and culture. Danny Rand’s role in the story veers from being a humble and empathic character disrupting the big, bad business world, to essentially a white male saviour, undermining and disrespecting everyone in his path. Asian culture is treated rather like an accessory than a multi-layered subject to explore, with Colleen suffering the most.

From the outset, Colleen had the expectation on her to go one of two ways: a strong, complicated, well-developed asian female character, or a one-dimensional, uninteresting accessory/love interest. Whilst not being a complete embodiment of the latter, she still leans very much toward that side of the equation, with the fight scenes being the closest to a saving grace. It’s a shame that we don’t get to spend quality time with Colleen to uncover more about her character, her interactions with Danny being hard to watch as he constantly disrespects her boundaries, undermines her every move and is just generally pretty patronising. But the worst part is, it seems that the writers aren’t aware that this is a bad thing, as some sort of spiritless connection is forced on screen to create potential romantic interest between the two, pandering to whoever they think still needs that angle to enjoy entertainment.

A complete flip of this is Joy. The exploration of her character is a model example of what Colleen is missing. Despite being a supporting character, her sub-plot is intricate and interesting enough to strike the right balance when taking in the whole narrative. As a business woman running one of the biggest and most influential, not to mention morally ambiguous, companies in New York, she finds herself in a battle with her perception on the world now Danny has re-entered the picture. On screen, she is smart, strong, but also vulnerable and supportive of her brother. Ward’s downward spiral of losing control is the most exciting plot point to follow at the back end of the first half of the season, with Tom Pelphrey giving a compelling performance outranking the rest of the cast.

Aside from the weak points in plot and character, the production slightly falters too. With repetitive cheap looking flashbacks and a cool hip hop soundtrack that gets underused, there’s not really anything special about Iron Fist compared to the beautiful cinematics of Daredevil or the astounding music-centric focus of Luke Cage.

There are too many misfires and blunders to really give Iron Fist much credit. It’s with no doubt that TV has upped its game in this decade, and whilst most shows have their merits, whatever there is with Iron Fist, doesn’t do enough to counteract or even distract from the blatant issues. This all being said, it can’t be denied that it is an entertaining show if the watcher is just in it for the plot. Anything more than this, though, it falls short and reveals the weak link in the Defenders’ individual adventures.

Marvel’s Iron Fist is available on Netflix from March 17.