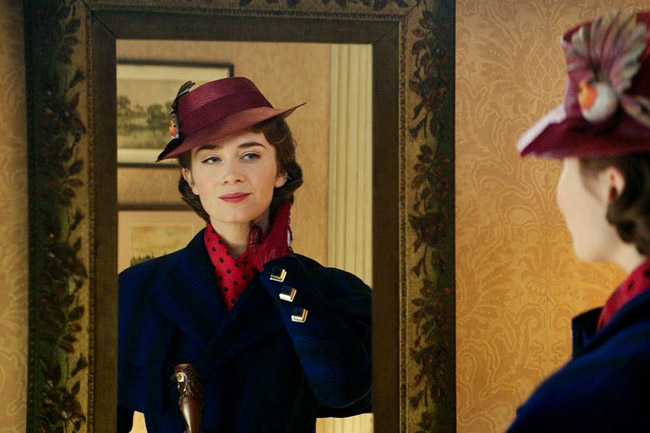 If you are going to wait long enough for a sequel, over fifty years will just about do it. Disney has dug deep into their vaults to recreate some classic on-screen magic, bringing its 1964 favourite live-action/animation hybrid, Mary Poppins, back to life with eye-popping colour and emotive storytelling all whilst maintaining its loyalty to its original.

Set some 20 or 30 years after the first, the Banks children, Michael (Ben Whishaw) and Jane (Emily Mortimer) are all grown up. Whilst Jane has become an advocate for the underpaid, Michael has gone down the more artistic route. Still living in Cherry Tree Lane with three children of his own and a wife who has passed away, he finds himself working as a part-time bank teller at the Bank in which their father was a partner just to earn enough money to put food on the table. As the bank’s vultures start to circle from an unpaid loan, Michael and his young brood are faced with the prospect of becoming homeless. That is until Mary Poppins in all her fabulous glory is swept in during a blustering wind storm to help save this family from falling by the wayside.

Now, Mary Poppins may be the titular role but the modernised version doesn’t have a set lead, in fact, this could be more the Lin-Manuel Miranda show if you were looking for a lead. The creator of the Broadway smash ‘Hamilton’ takes over the vacant spot left by Dick Van Dyke’s Bert. A young lamplighter named Jack, he accompanied Bert when he was just a nipper and is all too familiar with Ms Poppins. With his questionable cockney accent, wherever Jack is you know a delicious little song and dance number is not far behind. The only issue here is there just isn’t a single catchy or even iconic song that lives up to the original’s offerings but there is one with the Children that will catch the back of your throat with emotion. Blunt is practically perfect.

For obvious reasons, Emily Blunt takes up the mantle as the flying nanny drafted in to take the youngest of Banks Children on an animated adventure just to remind them to be children and let the adults be the adults. Blunt epitomises every inch of Julie Andrew’s Mary, Prim and proper with a posh playful side. She really comes into her own during an animated sequence amongst the woodland animals partaking in a Music hall show where she gets to show off her vocal stylings.

Colin Firth takes up the baton of the villain in the piece as William Weatherall Wilkins, with his uncle out of action he takes over at the bank with greed where his heart should be. As cameo’s go, yes Dick Van Dyke gives a little twirl but cameo stealer has to go to Meryl Streep as Mary’s cousin Topsy. A vibrantly eccentric mender of things with a delectable Eastern European accent, she could easily have slotted into any recent Tim Burton movie.

With numerous heartwarming sequences of Disney movie magic, such as an underwater bath scene and even a nod to PL Traver’s (Mary Poppins author) disdain to animated penguins – it’s worthwhile watching Saving Mr Banks which tells the story of the creation of the original movie and the relationship between Walt Disney and Travers – Mary Poppins Returns is delicious nostalgia trip that stays fruitfully faithful to the original warts and all.