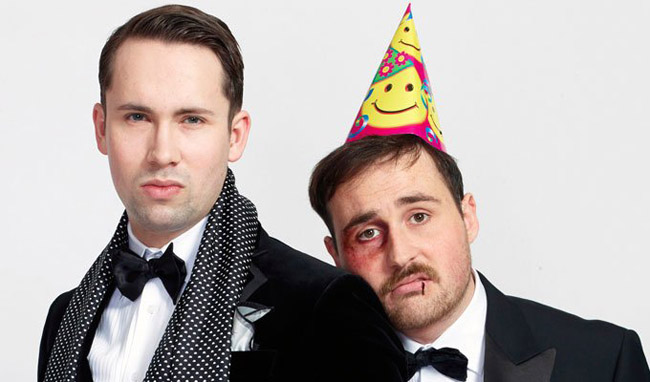 Channel 4 have recently announced a new 3-part comedy Blaps with Max Olesker and Ivan Gonzalez,  best known as the highly acclaimed duo Max & Ivan, are included, with a television version of their 2013 Foster’s Edinburgh Comedy Award nominated show, The Reunion.

As a beloved and critically acclaimed live sketch duo Max & Ivan, they’ve played a team of con artists attempting a Vegas heist. They’ve depicted every inhabitant of a town facing its impending apocalypse. They’ve recreated the extraordinary true story of how they came to be world’s finest double act.  But now, for the first time, the Edinburgh Comedy Award nominees and stars of W1A bring their signature style to Channel 4’s Comedy Blaps.

We had the pleasure of catching up with Max and Ivan to get a little insight into their hectic life.

You’re 2013 Foster’s Edinburgh Comedy Award nominated show, The Reunion met with a tremendous response – For those not familiar what was your show about?

Max – It is set at a 10-year school reunion, attended by a group of classmates whose live have all gone in different directions, come back to their old school for one night and meet one another again. You find out what’s happened to them since, old passions reignited, old conflicts re-emerge. You get to know a whole school of people. At the time in Edinburgh, we played every single character.

Ivan – All our live shows are normally just the two of us performing hundreds of different characters as we zip along on stage without any props or costume changes. For the Blaps we were able to bring in just a whole host of amazing comedians and actors making it come to life for television. We are extremely chuffed with who we have had involved.

In your own opinion, why do you think this show met with such high praise?

Max – I think there is something in the fact that it’s a fairly universal tale. Anyone who went to school and has kept in touch with the people they went to school with, which is a lot easier now with Facebook and social media. Even if you don’t go to a reunion you can still kind of peer across the divide and see what happened with people you went to school with. So it’s an idea that resonates with lots of people. People claim that school is the best years of your life; I don’t know if that’s true in the slightest, it certainly is a very powerful formative time. Everyone has got passionate memories, first loves and school bullies and mad teachers. Also experiences they haven’t thought about for years, but as soon as you start talking to someone it starts to dredge up all those memories. So we tried to find that common ground with our audience to tell a story people can relate too.

Ivan – Back when we wrote the stage show, Max was actually invited to what could have been his ten-year school reunion on Facebook and suddenly it wasn’t just people he was friends with on Facebook, people started adding other people. Suddenly you start realising there are old school friends you’ve not thought about for years and years. With comedy Blaps can we expect much of the same as the stage show?

Max – It has the same kind of heart to it but we have totally reinvented the story. We tried to keep exactly the same feeling and inhabit the same world, but yeah we have tweaked the story. It’s taken a step forward from the live show

The Reunion was picked up by film channel 4 for a new three-part bite-size comedy Blaps, are there any future series on the horizon with Channel 4?

Max – There’s a massive world to be explored, the fun of making the Blaps was getting the chance to dip our toe into the water and introduce a whole host of characters and a universe, so it would be amazing to get stuck into the night, explore all the other nooks and crannies of St Peter’s school and find out about all the hopes and dreams and ambitions of some of the characters we didn’t get to properly meet in the Blaps we made.

Ivan – It’s up to the television and comedy gods to decide whether we get to do that or not but we would love to.

How did the offer for Comedy Blaps come to you? Did you have to go begging to those at Channel 4?

Max – We worked with a production company called Positive who is an absolutely phenomenal production company. They have been involved with making some of the most wonderful British comedies of the last thirty years, we had long wanted to break into television and Channel 4 gave us the chance to turn it into a Blap.

Ivan – We filmed them all in a school in Chiswick over the course of two very long days at the end of last year which turned it into a reality.

How was the transition from stage to screen pan out for you?

Max – It was so much fun really because it instantly gives us new things to play with. With our stage show, we constantly try and push the boundaries of what we can do. We realised instantly that there are a couple of scenes that are strong bankers in the stage show and we thought OK we can put that into the Blap but as soon as we read it out loud, it suddenly lost something that it had on stage. We realised we had to re-write it completely but with the re-writing came lots of new and exciting opportunities. It was just so much fun to explore the characters more in-depth, with the stage show it was kind of bigger, broader brush strokes, although there are some very silly, big moments in the Blaps, there are some slightly more nuanced bits as well.

Ivan – I think as soon as we come to realise we wouldn’t just be taking our stage show and filming it, we would actually be writing a whole new thing inspired by that world, that’s when it really clicked. We had a great time putting it all together.

You’ve taken on some very interesting characters in the past, which are your favourites to perform?

Max – One of our all time favourites which is featured in The Reunion, Brian Bollingsworth, a very prickly yet good-hearted young man who has been dealt a fairly shoddy hand by life. He was a character we had kind of rattling around in various incarnations for a while before we even wrote The Reunion live show. We always thought there was something in him, he was the heart of the live show and he is still a crucial part of the TV Show. He has nothing but love and optimism in his fragile heart.

You currently have a show on at the Soho theatre until March 4th called Max and Ivan: Our Story – is this based on your life as a comedy duo?

Max – It’s kicking off in less than two weeks, on the 20th. You should go and see it because in the first time in history we tell a true story in one of our live shows. We talk about ourselves as opposed to concepting some sort of fabulous fable or other. It’s like a memoir, coming-of-age story about how the two of us met. It’s based on our two very very different childhoods. I was a teenage professional wrestler and Ivan was a pretty big deal in the cub scouts community.

Ivan – There are still some very big characters with us zipping around playing hundreds of different characters throughout the hour for you to enjoy as well.

Can you give us an insight into whatever you may be working on next?

Ivan – Right now we are writing our second series of our Radio 4 sitcom, The Casebook of Max and Ivan. We will be looking at hunting down some extra special guests. Each week we play bumbling private detectives and we try to solve a different case. In the last series, we had a load of great special guests like Matt Lucas, we had June Whitfield and Jessica Hynes and then we had a Halloween special. We are starting to write those, we have got almost two finished then another two on the go. I’m not sure how much I’m allowed to say – Max?

Max – Yep what he said (laughs)