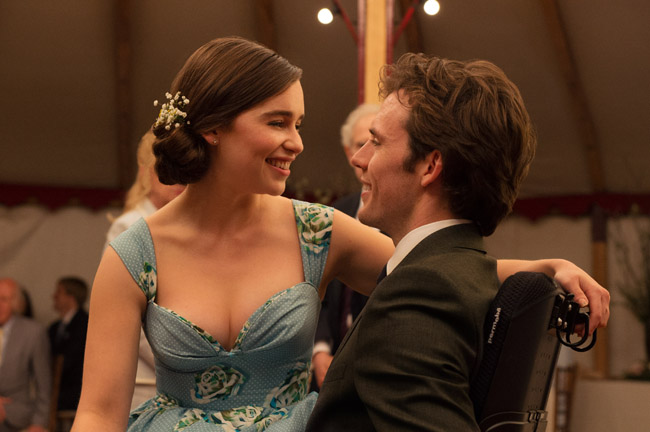 Fans of author Jo Jo Moyes have been crying out for Me Before You to be adapted for film and at last, they get their wish, this very British and female made film isn’t your typical Rom-Com we all come to expect but hits deeper with a controversial storyline.

Me Before You has already caused an outcry from disability campaigners countrywide over its depiction of the life of a quadriplegic young man. To be brutally honest, we have to ask the question why now this adaptation is causing such controversy when the book has been around for some time, and has proved to be one of Moyes most popular and the film stays loyal to the books storyline? Women in Film is an extremely hot topic in this current climate of feminism and we have in this film one which is heavily lead by females with its screenwriter (Moyes), Director (Thea Sharrock) and Producers Alison Owen and Karen Rosenfelt all proving that women are just as good at producing engaging films which appeal to men as well as women as much as any man.

The core of Me Before You is a love story – Lou Clarke, played with immense frivolity and quirkiness by Emilia Clarke with a dress sense to match – whose characters personality is extremely similar to that of Sally Hawkins in the 2008 film Happy Go Lucky – is down on her luck job wise but lands on her feet when she obtains a job at the Castle working for the Traynor’s as a caregiver. With no experience under her built, she is tasked to simply make Will Traynor – played by Sam Claflin who seems to be developing a slight resemblance to Henry Cavill – Happy. The real reason is to help to change his mind over a life altering decision he has made. This task isn’t the easiest for Lou and her will is tested to the max. Will was once a young banker with a love of extreme sports and living life to the fullest until one day two years previous he was struck down by a motorbike rendering him completely paralysed from the neck down. Lou however, is persistent and in an attempt to bring some life back into Will’s mind and soul with numerous adventures the pair become close and end up falling in love and changing each other in ways they didn’t think was possible. With most Rom-Com’s there comes a happy ending, but the happiness happens around the middle of the film with its wit and light hearted  anecdotes one of which see’s Will at Lou’s birthday party only to outdo her self-obsessed boyfriend with a gift of bumblebee tights. But as we approach the last quarter we are left emotionally battered given us a rollercoaster of a ride through this journey.

Claflin and Clarke are truly meant for their roles, each playing off the other with warm electricity, chemistry that sparkles and firmly cementing themselves amongst the chick flick lovers as the perfect couple. Along with the cast performances and witty dialogue even those (like myself) who aren’t really great fans of films of genre will be engaged, charmed and thoroughly entertained.

Me Before You is out in UK Cinemas June 3.