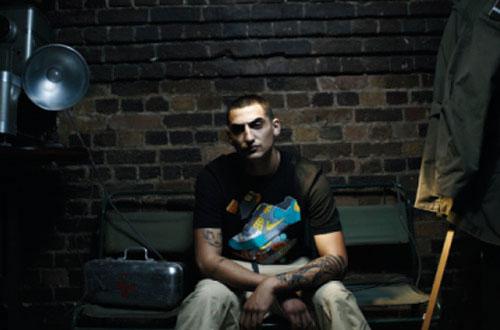 Mic Righteous, real name Rocky, oh yes, is one of the most talented and honest rappers in the UK. His music speaks volumes and takes rap music back to its grassroots where it’s about oppressed people having a voice. His mixtape Yob Culture comes with a hard and passionate delivery of lyrics – hear his anger and hunger as he take us deeper into his world…

His parents fled Iran in the early 80s, moving to Margate to begin what they hoped would be a better life. This was not to be. By the time Mic was 10, both parents were not around, so he and his sister faced maybe going into foster care. His brother looked after them for a few years, but at the age of 14, Mic was left to survive on his own again, this time without his sister who had gone to university. He left school and his seclusion from the world took his writing to new heights; it became a form of escape.

On Yob Culture, in ‘Tied to the Tracks’, he says, ‘Mic Righteous is back, the Mike Tyson of rap.’ The former undisputed heavyweight champion of the world is where Mic Righteous he got his name. ‘I used to be called Mr Reid because my brother was called Mr Blitz. Eventually I thought that name’s kind of whack, so I decided to change it. Mic Righteous was kind of like Mike Tyson, and I was really influenced by Mike Tyson at the time; I love boxing. I just thought of Mic Righteous, it just My manager said, ‘That’s it, we need to take over now, were ready to go.’ The name suits him well as his raps are packed with punches.

Mic Righteous first came to people’s attention shortly before he turned 18, when he featured on English Frank’s album The Hardway, then on Lowkey’s LP Dear Listener, which put him at the forefront of conscious rap and brought him to the attention of hip hop’s underground movement, gaining him a fanbase worldwide. About Akala, Lowkey and English Frank he remarks, ‘All them guys, they’re my dawgs.’ What does he think about people comparing him and Lowkey, even though the differences are obvious? ‘I don’t know why people say it. I don’t think I sound like Lowkey in any way; but if I do, it’s because I listen to a lot of his music, so it’s probably rubbed off. I’ve acknowledged that people have started to clock that, but it’s not like I try and copy him, he’s just one of my friends. Lowkey took me under his wing at one point when I was young. He’s taken me to the side many times and been like, ‘This is your future.’

The two discuss politics and religion in their songs. ‘I have beliefs,’ says Mic, ‘I believe in a higher power. I don’t know about religion, but I believe it’s a basic skeleton to live your life by. Everyone knows you shouldn’t steal, you shouldn’t kill, you shouldn’t do bad things. My parents were religious and moved here – nuff said [laughs]. My mum still prays and that, but she does a lot of things that contradict her religion at the same time; but we all do, don’t we? That’s why I don’t label myself as anything; I just have my own beliefs.’ Wise for his 21 years, likely down to an emotional and turbulent life, he is also sweet, charming and open despite this.

Things are looking up now he has signed a publishing deal with Sony ATV/Naughty Words. Naughty Boy is the producer behind Emeli Sandé’s hit ‘Heaven’ and new song ‘Daddy’; he has worked with Wiley, Chipmunk and Professor Green, among others, and previously with Mic, Dot Rotten, Griminal and Sneakbo on the single ‘F**kery’. ‘I signed a few months back, so Naughty Boy is my publisher. Shah’s one of my good friends and I love Emeli Sandé, she’s like my sister.’
As we’re there on the shoot of video ‘I Know’, Mic talks about the new track and the album follow-up to Yob Culture. ‘The new track is “I Know” – Charlie Sloth and DJ Semtex have been spinning it; we’re going to put it out soon. It’s the first off the album Campaign, and every single beat is produced by Preston Play. It’s kind of like Preston Play presents Mic Righteous’ Campaign. This is the new thing I’m trying to bring to the table, the pain, the essence. Campaign is the new movement, Yob Culture is the movement, Mic Righteous is the movement.’ And the next big thing. Back to the Future

Best food:
My mum used to make this dish called ‘subsi’, but you won’t know what that is.
We do actually…
[Looks excited] You know what it is? That’s sick! Do you like it? Oh I love you!

If you could bring a memory back from the past what would it be?
That’s quite hard… I remember one time, my brother took me out and we emptied out Coke bottles, cut them and put them on our arms so it was like we had guns on our arms…
[Anyone else confused?]
Cos the bumps at the end look like a machine gun.
[Of course…]
We took them out and pretended there were aliens in the field – then we shot them.

Favourite old-school tune?
[Ponders for some time] Tupac,
‘Hit ’Em Up’ or ‘Holla At Me’ or
‘Dear Mama’

What’s your most embarrassing childhood moment?
Probably when you’re out and about and a bird just squats on ya. In Margate there are a lot of seagulls and one will just decide to squat on ya and it will land on your face or something. That’s pretty embarrassing.

Worst childhood telling off?
One time I had a fight, my first fight, and I got told off because I didn’t win it, so I wasn’t allowed home. I was so pissed off I went out, found the kid and slapped him. Then I went home and my dad was alright!