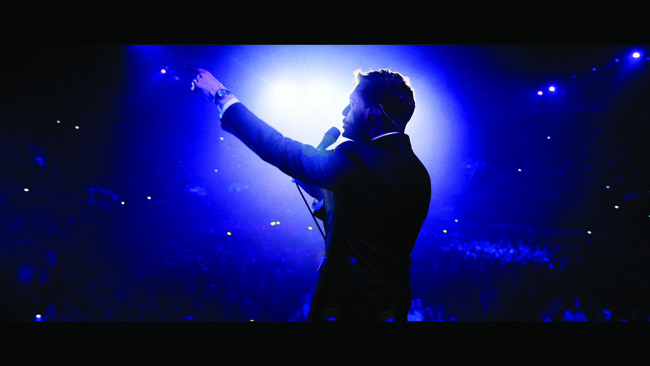 With fans in their millions, Canadian jazz and swing singer, Michael Bublé has become a household name since hit Home came out in 2005.

Known for his charisma, Bublé has encompassed the modern swing persona and his voice has become synonymous with Christmas. With 8 studio albums, 5 tours, and 5 Christmas specials under his belt, Michael Bublé now invites audiences to see one of his concerts on the big screen, on Tour Stop 148.

Tour 148 focuses on Michael’s 2013 – 2015 tour, in support of his eighth studio album, To Be Loved, which started with 10 nights at the O2 in London, consisted of 9 legs and racked up to a total of 172 nights around the world. The film opens with a big brass number, Cry Me a River and it’s clear to see why the whole world is in love with this dad of 2 from British Columbia, Canada.

He sparkles not only from his glittery black tux but from his very being as he croons to his audience of thousands, making each one feel like the only one in the room.

Michael has just as much love and adoration for his fans as they do him. The documentary explores and shows in audience footage as well as part of the main show how he interacts with the audience on stage (signing fans’ homemade signs and bringing kids on stage for a Disney sing along) to before and after the show where he invites hardcore fans waiting in the cold inside to watch the rehearsal. Unlike many other stars whose crew are told not to even ‘look in the eye’, Michael really does seem like a down-to-earth, genuine guy. This is a strong message of the doc, balanced with his talent and supported with the perspective of the crew.

Michael has the talent, he has the charm, but what really tops it off to make him a grade-A showman is his stage presence. Although sometimes verging on dad dancing, Michael demonstrates his smooth moves through most of his numbers, sliding down ramps and dancing with the mic stand Elvis-style. His classy moves are complemented with theatrical editing which although a little grating and distracting at times, works perfectly with the beat and emphasises Michael’s performance.

The structure of the documentary is much like an indulgent slice of cake. Each section explores something about touring life, whether this be crew relationships and friendships or the nitty gritty of unloading and transporting the whole soundstage. If this is the sponge giving us something to chomp into, Michael’s performances are the sweet, smooth icing on top complementing each segment with a song. This works particularly well for emotional number Home which follows a piece about the breakdown of relationships on the road and how touring effects families and marriages, which at first seems out of place tonally with the rest of the doc. However, when Home kicks in, everything falls into place.

Tour Stop 148 fits a lot into an hour and a half but doesn’t compromise on quality. At times, it may feel a bit fractured and it’s far from seamless but it always demands attention and provides a lot of pleasant surprises.