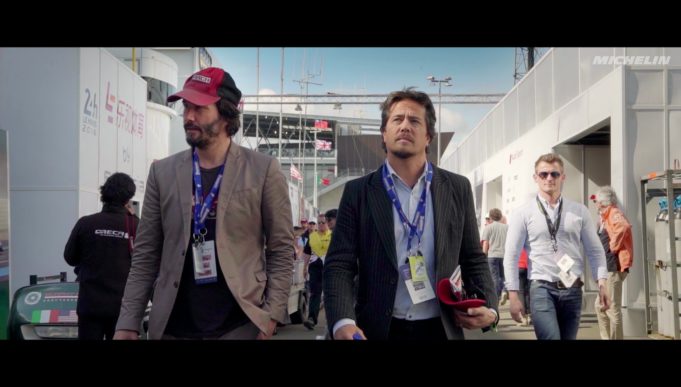 This video gives us a glimpse into the 2016 Michelin Le Mans, an automobile endurance event that takes place in France and lasts unsurprisingly 24 hours.

The video clip features Hollywood actor Keanu Reeves (who also was in attendance at the UK Goodwood Festival of Speed), who describes the event with the glee of a child as “a kind of dream day,” alongside his equally passionate Le Man fan and co- founder of Arch Motorcycles Co, Gard Hollinger. Their passion and emotion for the event is easily identifiable as they describe Bruno Vanderstick (The voice of Le Mans since 1993) as a conductor, orchestrating a story.

With speeding racing cars flashing amidst setting skies, the pair had the pleasure of being invited to hear the stories of people that the event matters to the most. We hear about the tiredness of narrating the rapid sporting programme and event and from Frederic Sausset, a racing driver who until February 2015 had no race driving experience.

The driver who doesn’t look like your average racing described the event like this- “the 24 hours of Le Mans is the most beautiful race; the most difficult race in the world, it’s so great, it’s legendary.” Also along the way the friend’s meet 9 x champion Tom Kristensen, who mentions the importance of Team spirit, being ON it which can transcend truly into whatever sport or hobby you have a passion for.

Michelin have done it again and shown that we should dare to dream big.