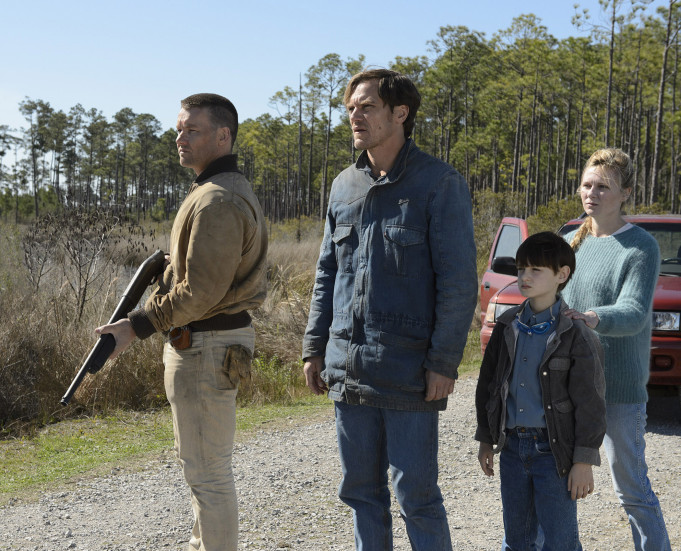 The Question that comes to mind with Midnight Special is what genre of film can we fit this into, Is it Sci-Fi or is it a mystery thriller? What isn’t in question is how extremely good this tale of mystery, family protection and just so happens to be a chase movie really is.

From the moment the Midnight Special opens there is something oddly ominous surrounding the whole picture, writer and director Jeff Nichols has crafted his script in such a way that keeps us all guessing whilst building up the picture slowly but surely as the two men and the child race through the country avoiding capture. With its visual throwback feel, from lighting to costume, anyone would actually think this is set in the early 80’s but in fact, it is present day. Sitting perfectly with the picture is the creeping score, written by David Wingo, which only adds to the intensity and obscurity of what will unfold. Roy (Michael Shannon) and childhood friend Lucas (Joel Edgerton) have battened down the hatches in a motel room, The TV showing a news broadcast of a Kidnapped boy, Alton Meyer (Jaeden Lieberher) who appears in the room, under a sheet wearing large heavy goggles. Even though these men appear dubious it soon comes to pass that Roy is Alton’s father and his actions are purely to protect his son. Alton is obviously the focal point of all of the madness and this boy has that same wisdom beyond his years as those of a young Dakota Fanning in the Alien TV Series Taken. In fact, the whole sense of this film feels like it has taken its inspiration from Taken.

Why does Alton need protecting? Who exactly are they running from? Why does he have to wear those protective glasses? And why can’t they travel during daylight? All are questions which you will ask yourself? As Nichols takes us on a journey into the unknown which essentially is just a chase movie with a spectacular yet heartbreaking ending. As the two men, Alton and later Alton’s mother, played by an anxious Kirsten Dunst, travel through the back roads of America, followed closely by a couple of deranged cult members and government officials we come to see Alton is special, There is simply more layers to explore here than you would expect from a straightforward chase movie. Not only can Alton pick up police radio transmissions in his head he also has special powers which see’s a satellite break up and fall back to earth causing mayhem to distract their hunters. He can also beam magnificent streams of light from his eyes which he has no control over and causes the boy no end of pain.

As they race towards their destination with an extremely tight deadline, their hunters get closer and closer, almost thwarting the end goal but they make it with heart-pounding resolution and a heartbreaking end.

The Ensemble cast of Shannon, Edgerton, Lieberher and Dunst are simply compelling in their performances, From Facial expressions to mannerisms the no-nonsense practicalities of their characters captivate.

Midnight Special is out in UK Cinemas April 8.