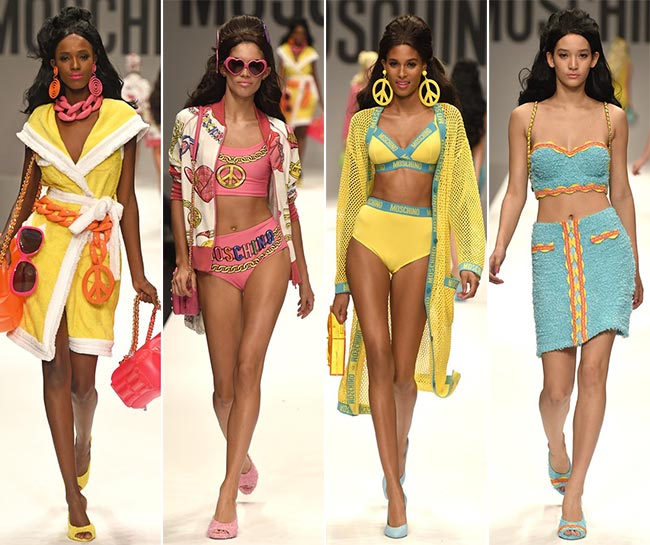 Watch the video catwalks from top designers across the globe at Milan Fashion Week including Gucci, Prada, Armani, DSquared2, Fendi and many more.

Milan makes a strong start to their fashion week with Gucci. Kate Moss and Anna Wintour were seen laughing on the front row and Frida Giannini, the creative director stayed true to themes of Gucci , she particularly loves the spirit of the 70s, military details, and not to forget the added exotic touch. The Spring/Summer 2015 collection was a perfect mix with short dresses in a variety of fabrics including suede, leather, denim, cotton and overlaid lace, all worn with small over the shoulder bags. Denim ruled over the collection and featured with wide leg trousers or culottes accompanied with jackets. The buttons and gold rope detailing could be found everywhere. Feather and fur gilets were worn with light dresses, and the kimono style jackets will definitely be the new must-have piece next summer.

In a desert of mauve dunes, Miuccia Prada as usual gives us a variety of interpretations for the new collection featuring a mix of a seventies revival together with soft, romantic pieces. We’re feeling the 70s revival more and more in Milan and now at Prada, but of course done in a singular and original way by Miuccia. Contrasting stitching on the coats, raw edges on the jackets and dresses, which were left to fringe on the back create an ambiance. Whereas the patchworks of leather, the painted stenciled motifs and brocades lighten up the collection. The palette was quite wintery with dark tones, but throughout the collection were touches of yellow, green, and peach which brightened up the clothes. For the accessories, the knee high socks were decorated with flowers, the shoes had wooden soles and the large and rigid bags completed this wardrobe which was stranded in a desert of mauve dunes, which transported us to a remote world.

Long blond hair and pink clothes, Barbie Girl, the new muse for Jeremy Scott at Moschino takes center stage!Barbie took to the catwalk at Moschino and every guest even found a doll waiting on their seats. Long blonde hair and pink clothes, the latest muse for Jeremy Scott took center stage! Mini dresses, high heels, sunglasses, handbags in the shape of shoes, the show was everything a little girl could dream of. One model even roller-bladed down the catwalk pleasing the crowd, because here at Moschino it’s always a show. With a trolley or coat hanger fixed on the arms the accessories became important pieces to complete the looks. The gawdy outfits were full of motifs and colours, with short shorts, crop tops tied at the back and bikinis, all featuring the logo of Moschino. Barbie can also be a femme fatale with a skirt and jacket made from sponge or a metallic tracksuit. The unslung universe of Jeremy Scott associated with this colourful haut label is once again full of wonder and without a doubt will create a lot of hype. In any case, the crowd loved to finish the second day of Milan Fashion Week with this incredible energy, full of imagination.

A clever mix and match of arty, sporty and couture pieces at Dsquared2Volume is the center of the collection at Dsquared 2 for next summer, with a strong colour palette by colour blocking and lots of embellishments. Although the models looked serious with their large black rimmed glasses, the atmosphere was definitely joyous. The twins Dean and Dan Caten mixed different universes, created something sporty but with a sense of couture, with draping, ruffles, pleats and also with feathers that decorated the long voluminous skirts and above all the embroidery made the clothes extremely sophisticated. The collection included ripped jeans paired with a shiny embroidered jacket, and quilted shorts worn over multi-coloured sequin leggings. A pink masculine suit had cropped trousers which just proved that the designers are equally as talented in tailoring. This summertime collection had a clever mix of pieces with an arty, sporty and couture feel.

Music and the spirit of the 70s are at the heart of the new collection for Costume NationalRock and music remain essential themes for Ennio Capasa but for next summer it will be re-worked for the spirit of the seventies, with fringed leather, wide-legged halterneck jumpsuits and short dresses encrusted with metal eyelets. Chocolate brown, navy and black gave sensuality to the long, flowing gowns in chiffon, the suede outfits were asymmetrical and the leather dresses were overlaid with lace. There was an unbridled sophistication which always has the idea behind it, of being made in Italy that is very important for the designer of Costume National, for the new summer collection.

Variations of blue at Emporio ArmaniAt Emporio Armani the collection revolved around variations of blue, with an overall dynamic and sporty silhouette, throughout this summertime collection. The trousers were turned up at the ankles and the short fitted jackets had white trimmings. Many of the short dresses had shapes that were very feminine which reinforced the idea of freshness and lightness. Stripes were seen throughout the collection, and were exaggerated on the shorts, jumpers and also on the loose fitting trousers. For the evening looks, Giorgio Armani used a new metallic material in PVC for the dresses and tops which almost looked sculpted over the body.

Giambattista Valli expands his range with the introduction of its brand new line called Giamba. Giambattista Valli expands his range with the introduction of his new line called Giamba. After his main ready to wear collection launched almost 10 years ago and his couture in 2011, the Italian designer addresses the new girls with long hair, tights and short flared dresses. The tunics were light and see-through with openwork guipure lace. Nature was present throughout, with embroidery and prints, inspired by the ceramics that decorate the exterior of the palace situated in the heart of a garden in Milan where Giambattista presented his show. A play between heavier fabrics and also lighter flowing textures created volume. The silhouettes were short, delicate and full of freshness for the summer season. The 3D dresses, prints and embroidery with frills defined a truly sophisticated wardrobe. A couture spirit ruled over the collection worn by the young girls in flowers.

Fausto Puglisi shows his new collection in Milan that revolves around geometric shapes, cut-outs and colours. Fausto Puglisi loves flashy, fun shapes, cut-outs and colour, so no wonder the fashion house Emanuel Ungaro chose him to be their artistic director as well. For his own line that showed at Milan Fashion Week, he dared to have more fun… Squares and triangles, in black and white, and also orange dominate the collection from head to toe. The designer also added detailing, by using rhinestones and sequins. Some of the pieces were perforated; from the sleeves on a leather jacket to a slightly flared skirt, all featuring crystals around the holes. The lighter pieces were welcomed like the mini-skirt with suspender-like straps, the gold biker jacket, the dressing-gown top and at the end the evening dresses featured zips at the front. It allowed us to see the softer side and the talents of the designer.