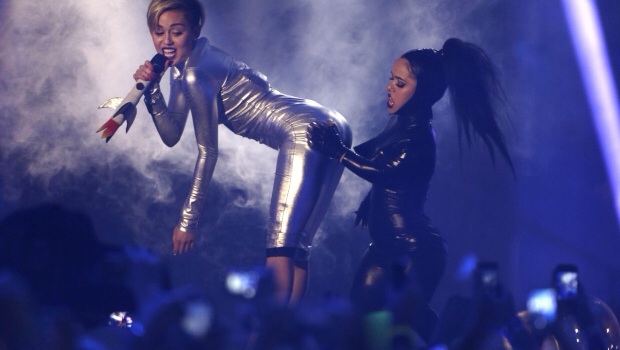 Has Miley Cyrus finally lost the plot or is she just being very sneaky with what seems to have become a master plan to gain all the publicity in the world! As she accepted her Best Video award at MTVs EMAs on Sunday the ‘Wrecking Ball’ singer appeared to light up a joint on stage. Maybe she was just recognising the fact that weed is legal in Amsterdam or maybe she just wanted to calm her nerves (yeah right) but either way it’s safe to say she caused anti drug campaigners all over the world to have major coronaries.

As well as the smoking session she did another raunchy performance but thank god Robin Thicke was safe at home this time. However, I fail to believe that she has no idea how people are going to react to her little stunts. Hey, she may have played Hannah Montana for most of her life but she ain’t stupid. At least she can tick off plenty of things on her bucket list. Twerking badly, check. Grinding against her dancers so hard even porn stars have to look away, check. Smoking a joint in front of millions of people, check. But it’s like they say, there’s no such thing as bad publicity and three days later we’re still talking about it. Miley, you might just be the most stupidly smart celeb we’ve ever seen!