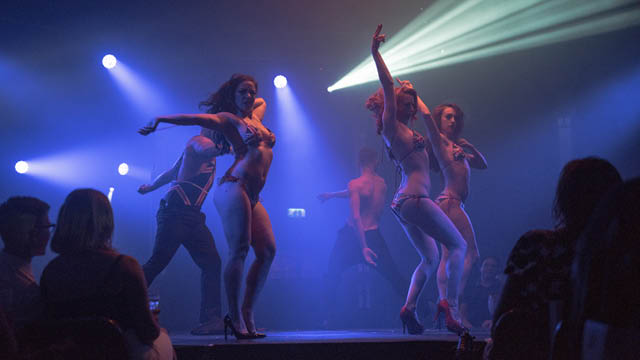 In 2015 we wrote an article called 10 reasons you need to see Between the Sheets and luckily, she’s back all things sensual, sexy and saucy. Between The Sheets is a contemporary burlesque cabaret, bursting with a dynamite mix of song, dance, comedy, circus and glorious innuendo designed to titillate, tickle and tease. Miss Polly Rae is a burlesque performer, chanteuse, compere and producer renowned for her unique style and unrivalled talent. Famed for bringing Burlesque to London’s West End in the critically acclaimed The Hurly Burly Show and the Soho Burlesque Club in London’s famous Hippodrome Casino, Rae has toured the world with her stunning act of striptease and song. As well as being a writer, performer and one half of cult comedy cabaret duo Frisky and Mannish, Laura Corcoran is also making a name for herself as a director in the world of cabaret. Her work so far has been widely varied, from cult immersive dining experience, Gingerline, to writing on and directing Elaine Paige’s most recent concert tour, which was filmed at the Royal Albert Hall, and broadcast on BBC Radio 2. She is thrilled to continue to work closely with Miss Polly Rae on Between the Sheets. Klare ‘Yaya’ Wilkinson has been working in the cabaret industry for the past 10 years as a stylist, hair and make-up artist and most recently as a talented art director. She has worked with Miss Polly Rae on The Hurly Burly Show, Boom and Bang at the Roundhouse, festivals including Lounge on The Farm and all three seasons of Between The Sheets. An exciting new addition to the ‘Between the Sheets’ team this year is producer Tom Gravett of Yellow Entertainment. Fresh from his sell-out season of acclaimed show ‘Cabaret des Distractions’, he will be bringing his considerable energy and experience to the proceedings to deliver the best season yet. BETWEEN THE SHEETS: An Intimate Cabaret