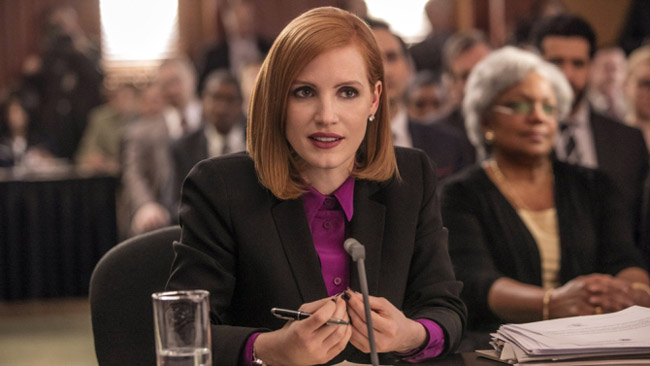 In John Madden’s Miss Sloane it’s implied women of high intellect, top of their game and always one step ahead of her male counterparts have to be a woman with the traits of a cold-hearted and arrogant trout, one that views sex as a treat and hires male escort’s to fulfil her sexual necessity, that, in a nutshell, is Jessica Chastain’s Miss Elizabeth Sloane.

Chastain, who excels in the most challenging of roles, without a doubt, makes Miss Sloane the riveting watch it turned out to be, adapting the script with a jellyfish-like sting to inject life into a script which at times fences on the ridiculous as it spirals into absurdity the further the story evolves. First-time screenwriter, Jonathan Perera’s script plays to Chastain’s strength of a confident woman who knows her worth and refuses to let anyone misguide her focus on the prize she has sight her cunning eyes on.

Miss Sloane is one of the most powerful lobbyists in Washington, it unfolds in the scenes that are played out in this story is how Sloane came to be defending herself at a senate hearing lead by a no-holds-barred and disgruntled Democratic legislator (John Lithgow) for her conduct in backing a firearms regulation bill. Through a sequence of flashback scenes we are introduced to Sloane, in her razor sharp attire and no-nonsense tongue as she refuses to back down to her boss at an old fashioned corporate firm who want to prey on women to help oppose the new bill which puts a whole new regulation in place on the sale of firearms.

Instead, the women who seem to have no scruples surprises them all by digging her heels firmly into the carpet; packing up her case files and taking half her team to join a scrappy boutique firm, putting on her fighting gloves to stand for what’s right according to her own moral compass. Focusing on Miss Sloane’s crusade, we also delve into the lack of a personal life she has; the personality she has in the office gracefully follows her into her social dealings which become one of the same as we learn she sacrifices everything for her work. Although she relishes her work, there is an underlying concern for her happiness, giving her life to her calculated and devious dealings in her business world means everything else around her is at a stale standstill.

The script that lacks any real emotional connection to its subject, as it nears to its admirable ending, uncovers one twist after another which verges on the farcical, over saturating and attenuate the premise of what could have been. The only winner in this elongated case is the marvel of Jessica Chastain who saves this script from its gaping hole of darkness.

Miss Sloane is in cinemas May 12.