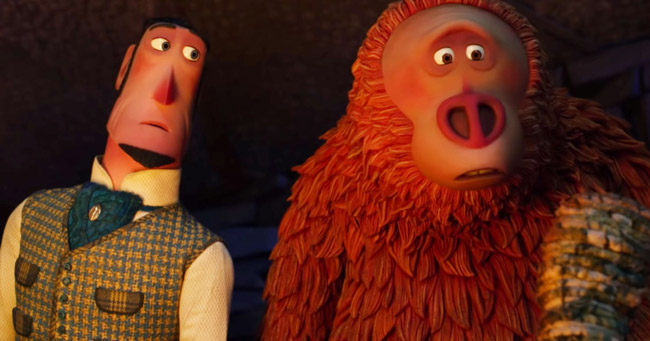 Everything seems to be just a little bit better when you’ve got your best friend by your side. To celebrate the upcoming release of Missing Link, released on 5th April, we’re taking a look at our favourite best friends in film. Missing Link follows Sir Lionel Frost (Hugh Jackman), a myths and monsters explorer, on his quest to find the fabled bigfoot. He thinks he finally found the creature that will earn him access to an elite explorers’ club when he receives a letter about the “Missing Link” between man and ape. What he discovers instead is a tall, furry, and goofy creature: Mr. Link (Zach Galifianakis). Frost and Mr. Link work together, joined by adventurer Adelina Fortnight (Zoe Saldana), to find Mr. Link’s long-lost relatives in Shangri-La.

Frost and Mr. Link travel around the world together, and in the process, become the best of friends. You can watch this duo as they take on their adventures in cinemas on 5th April. Marlin is an anxious and overprotective clownfish who needs all the help he can get finding his lost son, Nemo. Dory is a forgetful fish who tags along for the ride. The two are complete opposites but work together to travel across the ocean to bring Nemo home. Despite their differences, Dory and Marlin are the perfect team for the job and do everything they can to save Nemo from captivity. This mismatched pair made their debut in Finding Nemo and returned in the sequel: Finding Dory. They are the perfect example that opposites really do attract. When Carl Fredricksen ties thousands of balloons to his house to travel to Paradise Falls, he is expecting to go alone. When Russell, the young and annoying wilderness explorer scout, gets stuck on the porch, Carl is forced to bring him along. Russell is very excited to explore and earn more scout patches, so Carl reluctantly lets him help out as they fly across the world. They get off to a rough start; however, the two grow closer as they are faced with challenges and adventures through the jungles of South America – proof that age knows no number when it comes to friendship. Remy is a rat with a dream of becoming a professional chef. He loves fine dining and cooking more than the average rodent. When he gets discovered by the untalented garbage boy, Linguini, the two pair up to combine their talents and cook in the restaurant. By pulling on the hairs of Linguini’s head, Remy is finally able to cook, and Linguini earns the respect of his peers. Despite the criticism of the head chef and the health inspector, Remy and Linguini are able to open their own restaurant that makes both humans and rats feel welcome. This unlikely pair defy all expectations and work to make their dreams come true. All Lilo wanted was a friend to play with, so when an adorable blue “dog” shows up at the local shelter, she was more than happy to bring him home. Little did she know, Stitch was a galactic experiment 626 that escaped from jail. At first, Stitch was defensive and scared, but eventually his feelings change and he lets Lilo teach him the meaning of family.  Lilo and Stitch work together to save Stitch from his alien capturers, and help him stay in Hawaii.