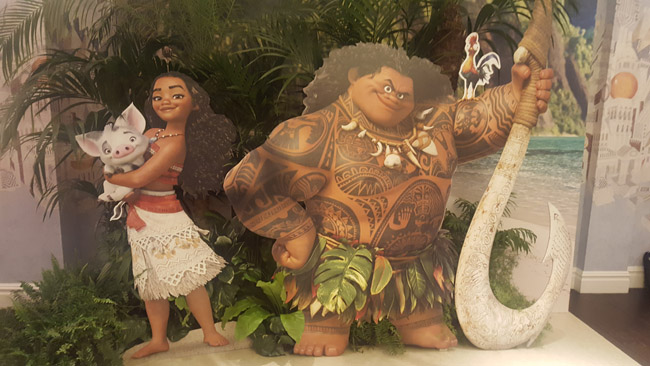 We had the honour of attending a very special film presentation in London for the upcoming Disney Animation, Moana, which stars the voices of newcomer Auli’i Cravalho, and the man that can do no wrong right now, Mr. Dwayne ‘The Rock’ Johnson.

Moana, tells the story of a young kick-ass Mauri girl discovering who she really is as she comes of age. Taking us on glorious adventures on her journey with the help and annoying guidance of new friend and Demi-God, Maui (Dwayne Johnson). As well as looking stunning on the big screen, this tale is not only cute but also poignant and funny; we got to see just enough of the film to make us very excited for the finished result which is released in December and sure to be yet another classic to add to the Disney Archives.

No Disney project is created overnight; this new offering from Disney took 5 years to make with directors John Musker and Ron Clements in the driving seat – Musker and Clements are the geniuses that brought us the likes of The Lion King, The Little Mermaid, Aladdin and more.  After the presentation, we were lucky enough to sit down with Producer of Moana, Osnat Shurer to get the lowdown on the film.

How did Polynesian mythology become the inspiration behind the film?

At Disney the directors come up with the stories they like to tell, they spend time thinking about the stories they want. John Musker was always fascinated by Polynesian stories, by the beauty and the visuals of the place. That inspired him to read further, once he started reading about the Polynesian mythology, pitched that to Ron – the other director – who thought it was very cool and wanted to do it. This is an incredible world. They pitched 3 ideas – very very broad ideas – that would take place in Oceania to our chief creative officer. Who also thought it was fascinating and loved it. He told them to go and do the research. The poor dears had to go and research [laughs] and that’s when they really fell in love with the cultures, with the beauty of the place, the beauty of the people. They learned about the navigations which were something that surprises me to this day as I knew nothing about until making this movie. They came back very inspired to tell the story based around the navigations.

A lot of research and time must off gone into getting to know the stories, how long did it actually take?

The research never stopped. For us we started with research, we continued with research we ended with research [laughs]. It’s something we deeply believe in, particularly if a story is inspired by a specific culture. A set of cultures, in this case, we wanted to keep in touch with that. From our research trips, we met a number of amazing people with deep knowledge of the region and stayed in touch with them. We worked with them continuously, there is also a bit of dance in the film which we used a Polynesian choreographer to help us with that. It went on and one.

From what we saw the music is very important to give it that authentic feel. Lin Manuel-Miranda was one composer responsible for bringing that to life – What exactly did he look for?

The combination of people from the region and grow up and been writing music that connects it to the roots. Lin is really brilliant and his ability to condense storytelling into song into music is magnificent. Mark Mancina has this great love and facility with world music. Instruments that you don’t expect. Sounds that feel right. In the process of working on the score – which Mark also composed the score – we went to Fuji last month to record a choir there, we’ve had choirs come from the pacific to bring that vocal quality. The harmonies are harmonies you don’t expect, you don’t hear them anywhere else except the specific and that also feeds into the score.

Was Dwayne Johnson’s Samoan heritage a factor in his casting as Maui?

To me, it was always a no-brainer. Part of that was simply his acting talent, but he is a very good actor. His love of his Samoan culture, he’s very very connected to it. His Mother is Samoan and deeply rooted in her culture. His Grandfather was the first Samoan wrestler in the worldwide scene and was very influential on him. It very much helped as we were developing the role together. His collaboration with us and his investment in the film, in the storytelling, in the creation of the character, was beyond anything you would expect from someone so busy. He gave it a lot of love and a lot of himself to it. He’s as good a guy as he seems.

From the clips seen earlier Newcomer Auli‘i Cravalho has a striking resemblance to Moana, was that planned?

Moana was fully designed before we met Auli’i so that was one of those kismet moments. We met Auli’i, auditioned her quite a few times. The directors talk about how often in animation we auditioning – and I learned that as well – sometimes you just close your eyes and listening to the person and thinking about them with the character. So it wasn’t ‘hey look at her she looks like Moana’, she sounds like Moana’ She is Moana and then a combination of that love, compassion, empathy, emotional intelligence if you will with her strength, her fearlessness her power, that is Moana and that is also Auli’i. She’s fearless; she comes from a very warm loving background. Add to that her talent as an actress is really just a natural talent.

Moana is a teenage girl just finding out who she is as a person, is there a message in the story you wanted to convey to teenage girls coming of age?

I would love to see anybody of any age and gender come out of the film with a sense of that we all have a voice inside us that tells us who were meant to be. Find that voice inside and listen to that voice. I think that’s true for any age. I also hope that people are fascinated and intrigued by the pacific island cultures and seek to learn more about them. I could go on and on but in addition to that, I also hope that people come away from the film remembering our relationship to nature and the beauty of nature and the importance of having a healthy balanced relationship with nature.