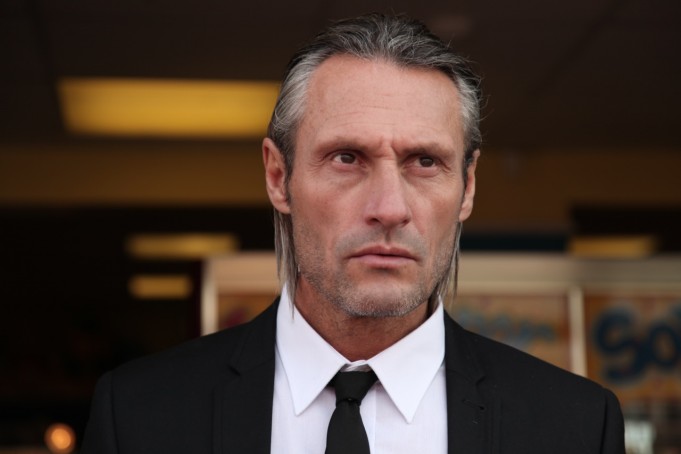 Everyone’s Going To Die is yet another great little independent movie and it’s about to hit cinema’s on the 26th of June, what better way to shout about the film than an interview with the lead actor, Rob Knighton.

Rob’s story is one that gives anyone hope of achieving anything no matter what their age, We find out the lowdown on the film as well as what it was like going from being a carpet layer to international model, starring alongside David Beckham in this year in a H&M advert, and actor all after the age of 50. Some men really do age like a fine wine. Your new film “Everyone’s Going To Die is released at the end of month, Tell us about the film and your character!

We shot it about three years ago; I think it may have been a bit more than that. It’s been a long time coming. Yeah I’m really pleased with what has been done and what the reviews have been so far, as it’s already had its American release. My character is a guy who is in a bit of a mess with his life; he is fed up, having a midlife crisis, goes back to his old house to carry out a job which is to find someone who has run away, this mysterious guy. It’s all a bit vague really but there is this mysterious character. He bumps into this girl who is in the same sort of frame of mind. She’s bored with her life, her relationship, she’s supposed to get married, and they meet up. It’s about those two over the next 24 hours. The stuff they get up too and the mischief. There is some funny stuff in there. Its subtle humour and I love that.

You’re character, Ray, comes across quite calm, cool and collected and your deadpan face throughout is perfect and made it quite funny. Where did you get the inspiration from to play Ray?

Just from life really. I’ve never trained or anything and only got into it about four years ago now, Just a short time before this film. It’s just from understanding Max’s writing, it just really rang true with me. This guy had everything go wrong for him and he thought everyone was against him but… yeah that was the good thing I never ever thought I would be doing a comedy, I was really keen to do a film but never thought about a comedy, but because it’s written so well it just takes one miserable face and it makes the jokes funny (laughs).

Even though this is a romantic comedy, it’s quite different to what we would expect from a film of this genre, which is quite refreshing! Now your love interest is quite a lot younger than yourself, was there any awkwardness on set when filming together?

Well she’s older than my girlfriend so not really (laughs). No. not at all, that didn’t even come into it really. It was all new to me as well, you know to actually just learn a whole script because it was the first big thing I had done I just got on and did it. I didn’t realise, I just go to small auditions now and it’s sometimes difficult to learn the lines in time, you know within a few days. This was just sprung on me and the relationship with Nora, but she was a lot more experienced, she was really lovely where she helped me. There’s actually some really funny stories about that actually. When we were turning the camera round to shoot her part I didn’t realise that I had to still act, I was sitting there looking on my phone. I didn’t understand she had to react of off me (laughs). So there’s all that stuff, all beginners stuff for me. I think because of Nora it made it a lot easier. What was it like finding out you had landed the lead?

I was really pleased; I was really excited to do it. The shoot was great; we had great weather all the time we were down there. It was late September something like that, on the few down days I had we relaxed on the beach, I actually had the car my character had, the brand new Jaguar (which we had for 5 weeks).

What wouldn’t really, me leading a feature was great. I worked with the guys before, the two directors. I had done a music video for them, they said they were planning a feature later on in the year and would I be interested in trying for the part. Yeah of course I was interested and when they started rehearsing for it, and trying different actresses out, I started to realise it’s something I could really do.

The film is extremely low budget and was made for only 65K and shot in only 19 days, How hard was it to get it wrapped up in that short space of time?

Well I didn’t have any experience of doing this, so to me I just turned up for work and that was that. I just did what they said. We had a week’s rehearsal before it as well. The guys will tell you the story that Folkestone really wanted to get the shooting done down there. They want to get the creative people in to try and build the area up as it’s quite run down. So they had access to lots of different places and areas, didn’t need parking permits, it was perfect.

Even though we have just seen you in Film anti-social, this film is actually your screen debut in a leading role, why did you choose this film to turn your hand into acting?

Well I was scouted, I had always been a carpet layer, I was sunbathing in the park one day in East London, and somebody came up to me and asked if I would I like to do a shaving commercial for TV? So after the initial shock I said yeah, went for it but didn’t get it. At the time the modelling trend was going more towards the older guys, Not young pretty model boys. They got me with an agency and I just started getting lots of work. A lot of people were asking if I would do acting, then I started to realise it was something I wanted to do. Yeah then sort of just went into music videos, then commercials, ended up doing a few short films. Then I was offered the feature.

Considering you’ve come from a carpet layer background isn’t all this a bit daunting?

It is a bit; it’s more exciting than daunting. It’s nice, I enjoy it. I’ve really got used to that thing of seeing myself on screen and pictures and stuff. It makes it a whole lot easier than working for people (laughs).

When I saw the film I was wondering where have I seen your face before, then after I had done my research I was like “awwww that’s where I have seen you, I had been perving over your modelling shots”

These things all seem to connect together that’s the whole point. There’s been commercial’s I’ve done recently, The H&M, David Beckham one was all over the place for a few weeks. That played all over. I enjoy it, I love it. I love doing it. What has been your proudest moment in your new career?

What was it like working with David Beckham in the H&M Advert?

He was a really nice guy, really relaxed, really professional. Great pool player, I don’t know why I was so surprised really. I had a pool professional for the whole day before Becks even came in. So we were practising and setting up the shots, He came in for the next two days and just hit everything he had to. It was a good shoot, massive, had a big budget, the crew was ten times as big the film crew. It was good fun.

So what would you say you prefer more, the modelling or the acting now you’ve had a taste for it?

Definitely acting, You get lost in it, you start believing what you’re doing. There have been some lovely comments about my performances, but I think it’s just believing it. I’ve never really trained to do it. A lot of people have asked what frame of mind did I get into, like you did but there isn’t a clever answer to, I just make out I’m that person in that situation, I suppose that’s it.

Obviously you’ve come to the game quite late in life, How do you feel about how you life has now gone in a different direction?

As I said before, it beats working for a living and I enjoy doing it, it’s really creative. The other bonus is for guys, the more grey hairs the better it is (laughs).

Everyone’s Going To Die is out in UK Cinema’s 26th June.