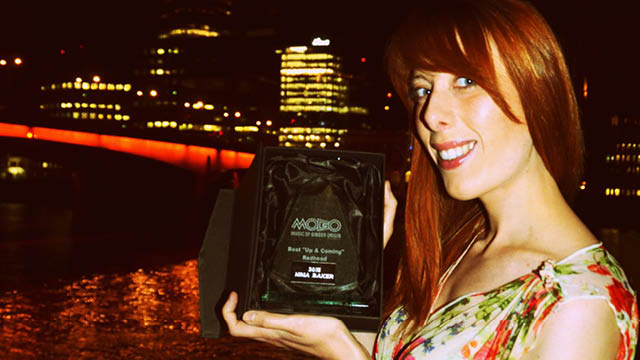 The sun had broken through the September skies and was lavishing golden rays on a sea of red where the largest collection of red-headed, auburn and carrot-topped people were about to gather for the main event on the ginger calendar.

Now in it’s 3rd year, red haired men and women gathered together in London to celebrate their flame haired origins and applaud their brethren’s musical talents at the 2nd annual MOGO (Music of Ginger Origin) awards. The sell-out event had 1,200 pre-registrations, making it the largest event of its kind in the UK and second only to Redhead Day in Breda, Holland with regards to participation.

The event, which took place on Saturday 12th September at Candid Arts Trust in Angel, London showcased a wide spectrum of red haired achievement and talent, with stalls, photographers, competitions and a friendly atmosphere for redheads and their supporters.

Live music from Red, Devon Mayson, Sheya Lily, Kezia Gill and a surprise appearance from Irish singer Orla Gartland, showcased the vast spectrum of talent within the ginger community and was a fitting build up to the main event of the evening – The 2nd Annual MOGO awards.

Last year the awards were scooped by Ed Sheeran for Best Male, Kate Nash for Best Female and Florence Welch for Best Honorary Redhead. 2015 saw a new category which recognises emerging redhead talent, with the winner, Nina Baker, who brought the event to a close with a stunning performance.

On winning the award Nina said “It is always great to get praise and accolades but it means just that little bit more when it’s from your peers. Redheads form less than 2% of the world’s population, which instantly makes us the most precious, so to be chosen amongst that pool makes it super special and the rarest of the musical awards”

“There is certainly “Ginger Music”. Look at the artists who have won the MOGOs – Sheeran, Nash, Welch – They are all a little “different”, some are a little “out there”. But that is what we are all about, we are different, we are non-conformists, we set trends we don’t follow them, we are eternal flames and others get warmth from our glow”

Photographer Kieran Dodds captured photos of redheads for his art project ‘Gingers’, while Jacky Colliss Harvey, author of ‘Red: A Natural History of the Redhead’ answered questions from the audience about how the red haired have been represented through the ages.

A new attraction at this year’s event was a speed dating event which sold out weeks in advance and raised money for the Anti-Bullying Alliance. Compeer of the speed dating event Jessica Shailes commented “All of the elements at this years event proved popular, but the speed dating seemed to really catch on. It was amazing to see so many people engaged in conversation. Who knows, we may even see a ginger wedding come out of the event one day!” she adds.

Shailes is also the founder of Redhead Day UK, and runs online shop Everything for Redheads (www.everythingforredheads.co.uk). This year she joined up with 2 other prominent members of the ginger community, Barry Singleton, originator of the MOGO awards and owner of Ginger with Attitude (gingerwithattitude.co.uk), and Emma Kelly of Ginger Parrot ( http://gingerparrot.co.uk) to stage the event.

“It’s my first year organising Redhead Day UK and it’s been a ginger adventure; from picking the venue to seeing redheads queuing to get in, has all been wonderful. The friendly, relaxed atmosphere was exactly what we wanted to achieve” says Emma “Having the Anti-Bullying Alliance on board has been incredible too – their work in schools and their Anti-Bullying Week in November are great steps to combat bullying in the UK. “