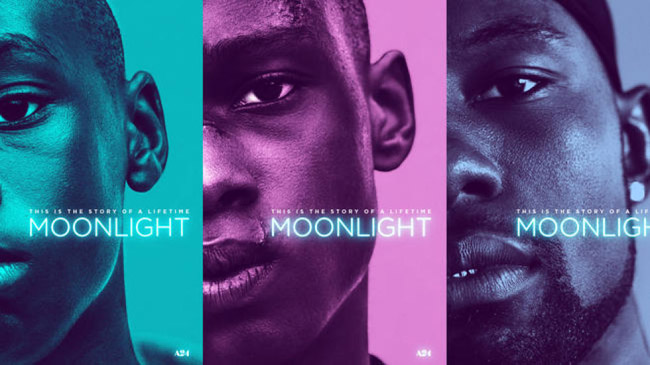 Despite leaving the BAFTAs empty handed, Barry Jenkins’ Moonlight could still be the film to upset La La Land at the Oscars later this month.  But is the Academy brave enough to reward this spellbinding story of a young black boy growing up in Miami?

Put simply, it chronicles the life of a young black man growing up in a rough part of Miami as moves from childhood to adulthood.  The film itself is divided into three chapters, each named after one of his names.  The first one is Little, his nickname as a ten-year-old when he’s bullied at school, withdrawn and constantly running away from home and his crack-addicted mother, Paula (Naomie Harris).  By accident, he finds a father figure in the unlikely shape of drugs dealer Juan (Mahershala Ali) and the maternal care he craves in his girlfriend Teresa (Janelle Monae).  They’re the first two adults he’s ever trusted. Chapter two is Chiron, the boy’s actual name, and he’s a teenager now.  Life isn’t much different, with the bullying worse than ever and his mother’s addiction has escalated, but now he’s becoming aware of his own sexuality.  His friendship with Kevin (Jharrel Jerome) is developing into something more.  Part three is Black, Kevin’s nickname for him.  A young man who dresses like his father figure Juan, his mother is now in rehab when, out of the blue, he gets a call from Kevin and travels miles to see him, even though they haven’t seen each other since school.  What happened between them in his teens still lingers in his mind.

A coming of age story is just part of it.  The film is also a vibrant portrait of contemporary African American life and a personal meditation on family, friendship and identity.  Yet, while it’s personal, it’s also unmistakably universal, so just about anybody watching can find something that chimes with them, however small.  Add to that a rhythmic, almost hypnotic quality, with each section having a watershed moment of its own, and what you have is something uniquely irresistible, full of compassion and truths.

Director Barry Jenkins based his screenplay on the unperformed play, In Moonlight Black Boys Looks Blue, by fellow Miami native Tarell Alvin McCraney.  Both grew up in the same part of the city, even though they didn’t know each other as children, and both shared experiences depicted in the play and retained for the film, most notably living with mothers struggling with drug addiction.  That part of the story is the source of one of the film’s most fascinating themes, upturning stereotypes and challenging all-too-easy perceptions of others.  It’s the boy’s birth mother who’s supposed to be caring and nurturing but it soon becomes apparent that she’s neither, her only interest being feeding her habit.  He finds the care he needs at the home of the last person you would ever imagine as a role model, the local drug dealer and his warm-hearted girlfriend.

It’s all anchored in some tremendous performances.   Three actors play the boy at the different stages of his development:  Alex Hibbert is the ten-year-old, Ashton Sanders the teenager and Trevante Rhodes the grown up Chiron.  As they each reflect the other’s mannerisms and gestures, it hardly seems to matter that the physical similarities between them are limited.  Currently, the front-runner for the Best Supporting Actor Oscar, Mahershala Ali is riveting as drug dealer Juan, streetwise and dangerous when it comes to conducting business, but imparting invaluable lessons to the young boy who is badly in need of guidance.  Equally impressive as the mother Paula is Naomie Harris, who initially resisted the role because it portrayed a black woman in a negative light.  Thank goodness she changed her mind!  Appearing in all three parts of the film, she declines shockingly before our very eyes, yet her very humanity means she’s not wholly unsympathetic.

Moonlight is that rare piece of cinema that combines beauty with power – beauty in its photography, music and its characters, power in its story and universality.  There’s so much in the film that it needs a second viewing – in fact demands one – but seeing it twice is no hardship.  Quite the contrary.

Moonlight is in cinemas from Friday, 17 February.