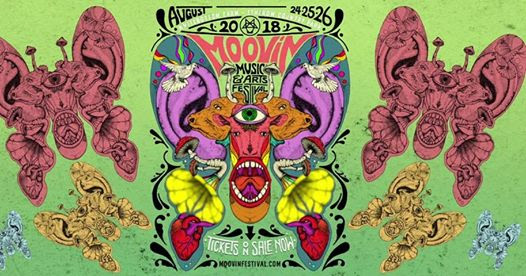 Moovin Festival is back once again in 2018, August Bank Holiday weekend, and promises to be another unique boutique, bass, funk, soul, hip-hop, reggae, house and d’n’b gathering for real music lovers.

With a succession of legends having already performed at Moovin, this intimate event attracts some of the world’s most celebrated artists to its small but perfectly formed festival site located only twenty minutes outside of Central Manchester. This year sees Hip-Hop royalty De La Soul headlining proceedings with their full live band whilst other heavyweight names on the bill includes the likes of Groove Armada and Goldie in a line up that brings together the coolest acts from far and wide as well as the freshest local talent. This edition of Moovin promises to be the best yet! Taking place at the eco-friendly Whitebottom farm in the stunning countryside of Etherow Country Park, Compstall, the journey there is through a magical canopy of trees, past a lake filled with waterfowl, and has a breathtaking gorge to welcome you at the entrance. Once again our line up is BIG but the capacity limited as the Moovin team want it to remain the friendly, personal experience and place that we believe makes it so special.  Stages at Moovin include The Barn, a large open-sided cow shed with bales of hay to relax and chill on as well as sound systems throughout the site that are guaranteed to knock your festival wellies off. With a counter-cultural feel and devotion to booking only the finest performers, Moovin Festival is a laid-back way to catch your favourite acts as well as exciting new artists. It’s about making new mates and discovering new sounds; it’s a place to enjoy ethically sourced foods and cocktails, to try some holistic healing treatments and enjoy circus performers, festival fun and games and really indulge in everything fun for what’s set to be a magical weekend.

Musically Moovin crosses many bases and this year welcomes De La Soul with their full band live show, The trio from New York have arguably changed the landscape of hip-hop for over 20 years and have rocked the world with their songs full of inscrutable samplings, whimsically irreverent lyrics, social commentary, light rhythm and laid back rhymes. They are joined by a diverse line up which includes high profile acts such as the seminal house legends Groove Armada and Drum & Bass maestro Goldie (MBE).

The original mixologists, Cold Cut, bosses of NinjaTune records will be digging deep into their eclectic crates for a special set whilst the highly influential, Amp Fiddler, a former member of seminal funk bands “Parliament” and “Funkadelic” will be bringing his unique distinctive take on urban soul straight from the heart of Detroit. Moovin’ regular and DMC champion DJ Woody will be joined on site by scratch demi-god DJ Yoda to showcase their incredible turntable skills as they cut and paste beats with greatest of speed, skill and dexterity.

Adding to Moovin’s mixed up musical melting pot, Jamaican superstar Eek-A-Mouse makes a rare UK appearance.  His inimitable style has brought him an international reputation and bookings throughout the world for his unique slant on reggae. Former street performer Dub FX, epitomising independent music success, has graduated to a global reputation and fans in their 100,000’s since setting of from Australia to Europe with a plan to live in a van and street perform while travelling.  We are delighted to welcome him to this years Moovin, and with his rich, soulful layered loops he is topped to be one of the many festival highlights.

As well as these main acts— and more to be announced from the underground dance music world, Moovin brings together a roster of new upcoming bands, artists and DJ’s to join the party with well over sixty artists currently confirmed to perform over the festival’s three days. Except for a tasteful and varied array of the best quirky bands, local talent, drumming outfits, and expert DJ’s from across the musical spectrum as well as some secret surprises set to complete the festival with style.