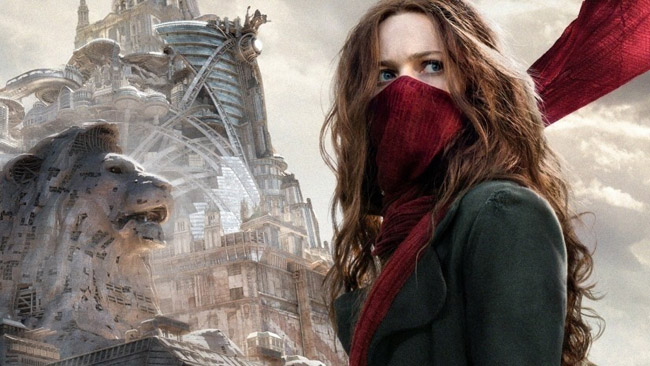 Dystopian YA novel adaptations seem to be a trend that will not go away, The Hunger Games set a precedent that most fail to live up to and as each year passes the imagination disintegrates into dust. The latest that falls into that category comes from the Lord of the Ring’s Peter Jackson and first time director Christian Rivers who produce a derivative paint by numbers affair with a transparent twist.

Set approximately 3000 years from now, the world has been scorched of cities as we know them in a 60-minute war. The Mad Max type landscape is roamed by cities on tractor like bases, some are tiny and insignificant whiles others are tremendously large, bellowing and boisterous monstrosities that swallow the smaller ones whole for fuel and ancient parts.  ‘London’ is one in particular, with landmarks such as St Paul’s Cathedral dome and Trafalgar Square lions scattered around its compound. This is the big daddy of Cities and no one in their right mind would come against it. The well respected Thaddeus Valentine (Hugo Weaving) is at the helm of this city, on the surface he appears to be an honourable man but as Hester Shaw (Hera Hilmar) boards the city and subsequently attacks him it’s obvious he isn’t as snow white as he would like to portray.

No sooner is Hester on board; she quickly gets kicked off with Museum apprentice Tom (Robert Sheehan) and we are soon on a quest to get back to ‘London’ so Hester can finish the job before weapons of the past can be rebuilt to destroy the world as they know it. The major problem here is the fact we have all seen this before, there is nothing original or imaginative to set this out and in parts can be seen as a homage to the likes of Star Wars. Throw in Hester’s backstory and a resistance group lead by Anna Fang (Jihae) and we have that age-old dystopian battle to save the world and save the oppressed.

The beat of the plot steam punk’s its way to its predictable ending (which you’ll easily call from the very first scene) with visually exciting tenacity. The attention to detail to the dark and grimy depths of the core of ‘London’s inner sanctum are beyond doubt an impressive feat but at times it confuses itself. Does it want to be serious or funny? Neither hit with any real connection, the jokes fall flat and even the funniest moment when the Minions are referred to as American Deities’ raises a few titters isn’t quite factually correct.

The performances are bog standard, Hilmar gives as good as she gets as an ass-kicking and determined heroine but Sheehan doesn’t really have much to work with. Thrown in as a side-kick that could be a love interest, he really doesn’t have much to do but follow Hilmar’s Hester around like an annoying little puppy.

These Engines have had a false start and broken the fan belt, thank god they are mortal because this one dies a very slow death.