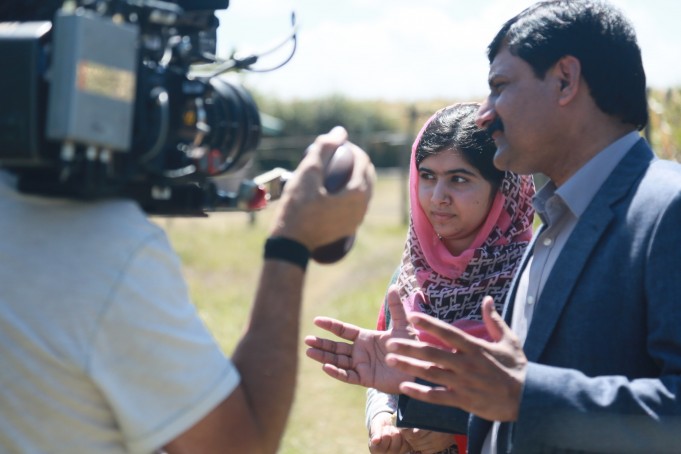 Ahead of the release of He Named Me Malala on the 6th November, we decided to have a look at some of the most inspiring women in film. We remember Emma Watson as the young, cute Hermoine Granger that we all knew and loved. We watched her grow into the fearless, sassy girl we saw in the later films.  Most importantly, Emma Watson has grown into a beautiful woman whom, is now a US ambassador and the face of the #HeForShe campaign, encouraging men to participate in the conversation about gender equality. Not only this, she was also named the Celebrity Feminist of the year 2014. Most famously known as our action lady ‘Lara Croft’, but there is so much more to the fantastic Angelina Jolie than her feisty film character. Not only has Angelina taken part in a large about of humanitarian work with refugees in countries of conflict and those affected by natural disasters, to which she was named a UNHCR Goodwill Ambassador. Angelina has also set up several charities including the Education Partnership for Children of Conflict, which funds education for children affected by man-made or natural disasters. And in 2003, she founded the Maddox Jolie-Pitt Foundation (after her first son, Maddox, who she adopted from Cambodia), which is dedicated to community development and environmental conservation in Cambodia. On top of all of humanitarian work, Angelina also made the incredibly brave decision to under go a double mastectomy, after finding out she could be at high risk of developing breast cancer, the same disease that took her mothers life in 2007. Angelina shared her brave story and journey with the world, encouraging others to get tested and take the necessary precautions. What a woman! This beautiful, sensational woman is one of the world’s best-known actresses with films that have gone down in history, such as Breakfast At Tiffany’s. However, Audrey was also known for her work later in life, as she became a UNICEF ambassador travelled to various countries to highlight issues such as famine, children working on the street, unsafe drinking water in third world countries and further nutrition projects. Audrey was awarded the United States highest civilian award the ‘Presidential Medal Of Freedom’; Audrey also continued her work with UNICFEF, despite being ill with cancer. Emma Thompson is another actress who has thrown herself in to work for the good and needs of others. Emma is an avid support of Greenpeace and in 2009, along with three members of the organisation; she bought land that was under threat from a proposed third runway in Heathrow, making it almost impossible for the plans to go ahead. In 2012, Emma also attended a Greenpeace expedition in Gaia to raise awareness of the dangers of drilling for oil. Not only this, Emma is an ambassador for the charity Action Aid and has travelled to several countries to raise awareness of the fantastic work they do. On top of this, she is a patron of the Elton John AIDS Foundation and the Refugee Council and an Ambassador for the Galapagos Conservation Trust. Last but not least is seventeen-year-old Nobel prize winner Malala Yousafzai who has always been extremely passionate about school, education and girls’ rights  to attend. In 2009 Malala began writing a blog for the BBC under a pseudonym as the military hold on the northwest district of Pakistan Malala lived in intensified. Malala’s popularity and national recognition grew, and for this the Taliban wanted to take action. Malala and her father both received death threats, and on 9th October 2012, a masked Taliban gunman forced his way on to Malala’s school bus and shot her through the head, neck and shoulder. Malala survived the attack, however she was in a critical condition in and only released from hospital in January 2013. Malala’s attack caused huge outrage and in the weeks after the attack over 2 million people signed a petition to the rights for education. Since Malala’s recovery she has been as passionate on the rights for education as ever and in 2014 was awarded a Nobel Peace Prize to which she exclaimed she would continue to work for education until every child can go to school. After the attack in 2014 Malala started the ‘Malala Fund’ to bring awareness to the social and economic impact of girls’ education and to empower girls to raise their voices, to unlock their potential, and to demand change. What an absolute inspiration to everyone.

All of these exceptional women have thoroughly inspired us and you will be able to see Malala’s amazing story on the big screen in He Named Me Malala, the stunning documentary about her life. Watch the film in cinemas this Friday.