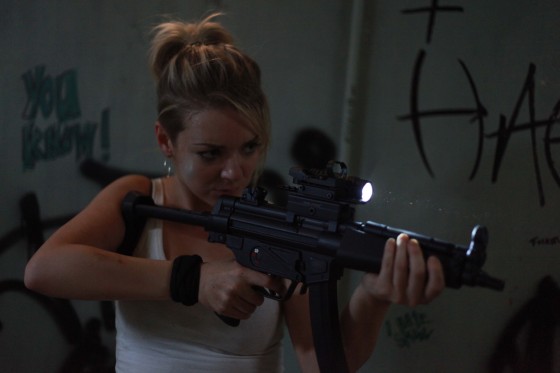 A British thriller about a psychotic sniper targeting residents of a high-rise building due for demolition? How outrageous, you might say. But you’d be mistaken, because Tower Block is a complex, gruesome, mysterious and intriguing thriller, with the additional supplement of Janet aka Sheridan Smith from Two Pints of Lager and a Packet of Crisps.

When 15-year-old Jimmy is murdered outside their front doors, the residents of Serenity House, a declining London estate, turn a blind eye. Not a good idea. Soon a sniper armed with a military rifle starts eliminating them one by one for their discrepancy. Russell Tovey, rapper Kano, Ralph Brown and Jack O’Connel are the main characters held prisoners in their flats by this ruthless individual.

While placing the viewer into the predicament of its central characters, there are a lot of secrets that are unravelled in Tower Block, but the nitty-gritty of the story is that some mysterious bloke starts shooting the occupants within the estate one by one.

Along the way, we are introduced to two flatmates who seems to keep themselves away from the world, an over confident cockney lad who takes them for a ride, a middle-aged couple, a recluse alcoholic and a single mother.

Smith’s commanding and authoritative prowess on-screen makes the bad seem badass. Such is the case for her prominent role in the movie.

Tower Block is undoubtedly curious if not quite strange, but a mix of elements and suspense that, on paper, shouldn’t work together whatsoever, actually works flawlessly well.

The fact that it comes together as pleasingly as it does should be ultimate proof that James Nunn and Ronnie Thompson-as-directors is the real deal, and possibly a sign that they are at their best working as a duo.

Tower Block in someways is great because as well as its interesting storytelling techniques by which it keeps us hooked, it doesn’t drag the viewer’s sympathies around by the ear.

It’s enduring narrative, fast-moving action scenes and strong performances packs enough bullets to bump it up the UK movie spectrum. There may be an awful lot of running around, but you won’t walk away from this edgy thriller unsatisfied.

Tower Block is out on Blu-ray and DVD February 18.