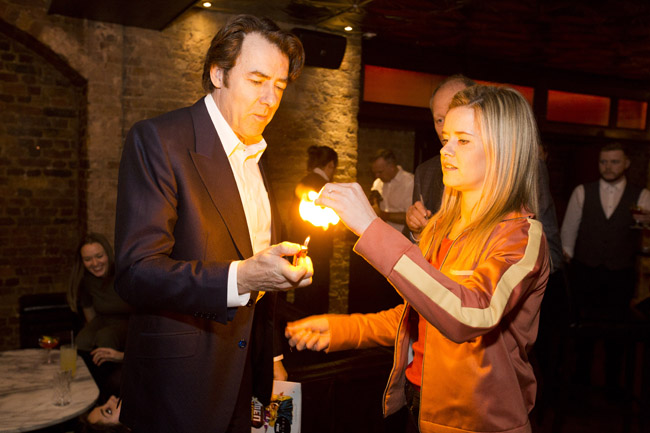 Mutants have come out of hiding at The Mutant Lounge, a new cocktail bar and experience that opened its doors for two nights only – to mark the launch of the highly anticipated U.S. drama LEGION only on FOX Thursday 9th February at 9pm.

Jonathan Ross, Bianca Gascoigne, Pascal Craymer, DJ Tim Westwood, Akin Solanke-Caulker (Made in Chelsea) and Sandi Bogle (Gogglebox) were amongst the first to witness the mutants demonstrating their telekinetic and pyrokinetic superpowers, while enjoying a stunning recreation of the LEGION universe, complete with thrilling surprises and mind-blowing displays throughout the night. Consumers who applied for tickets across two sold out openings were also able to take part in the immersive experience as well as see a sneak preview of episode one.

Already named one of the must-see shows of 2017, LEGION was inspired by the character from Marvel’s X-Men comics, with British actor Dan Stevens (Downton Abbey, Beauty & The Beast) in the title role. The show is produced by FX Productions and Marvel Television, with executive producer Noah Hawley, an executive producer on the Emmy® and Golden Globe®-winning anthology series Fargo.

LEGION is the story of David Haller (Stevens), a troubled young man who may be more than human.  Diagnosed as schizophrenic as a child, David has been in and out of psychiatric hospitals for years.  Now in his early 30s and institutionalised once again, David loses himself in the rhythm of the structured regimen of life in the hospital: breakfast, lunch, dinner, therapy, medications, sleep – spending the rest of his time in companionable silence alongside his chatterbox friend and fellow patient Lenny (Aubrey Plaza, Parks and Recreation, Mike and Dave Need Wedding Dates).

The pleasant numbness of David’s routine is completely upended with the arrival of a beautiful and troubled new patient named Syd (Rachel Keller, Fargo).  Inexplicably drawn to one another, David and Syd share a startling encounter, after which David must confront the shocking possibility that the voices he hears and the visions he sees may actually be real.  Visually stunning, blurring the lines between reality and fiction, witness the evolution of the unlikeliest of superheroes, as his struggle with reality could, in fact, make him one of the most powerful mutants ever known.

The series also stars Jean Smart (Fargo) as nurturing but demanding therapist Melanie Bird; Jermaine Clement (Flight of the Conchords) as her husband Oliver, a brilliant scientist; and Melanie’s team of specialists, including Jeremie Harris as Ptonomy Wallace, who can read the memories of others, Amber Midthunder as Kerry Loudermilk, and Bill Irwin (Interstellar) as Cary Loudermilk, a geneticist.