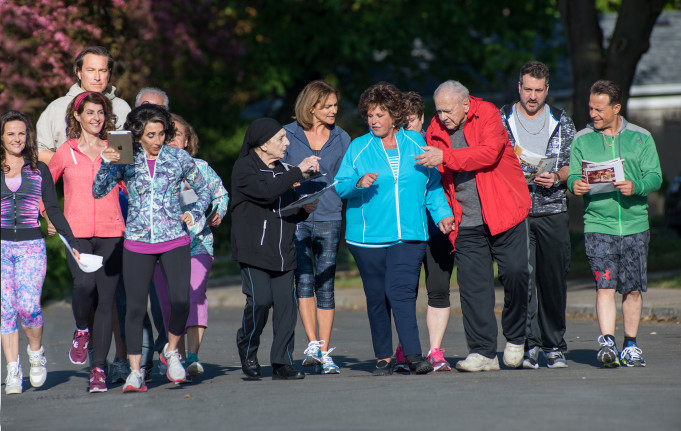 My Big Fat Greek Wedding 2 see’s the return of Toula (Nia Vardalos) and Ian (John Corbett), now parents to the 17 year old Paris (Elena Kampouris), a typical teenager who thinks everything her parents do is embarrassing and it’s made worse by her overbearing Greek family who never leave the side of any family member. In fact, you turn your head for a second and they appear. There simply is no way in getting away from them but Paris tries to put a stop to that my applying for colleges well away from her doting family. As with the first film, it’s all about Toula and how she has to learn to let go and just accept life for what it is. When she learns Paris wants to leave Chicago to go to college she utters why you want to leave me (which will resonate with many mothers of many cultures worldwide). Here there is that element of the first film when Toula had to deal with her own overbearing parents.

Essentially, Family and the love they have for one another is the very core of the whole film, they would simply do anything for each and you can’t fault any of the cast for not portraying their loyalty to each other. Aunt Voula is still very sexually driven and in everyone’s business. She sees’s Toula and Ian need to rekindle the romance and passion in their marriage and gives her some tips on how to bring that fire back as well as giving her a sexy red slip to spice up their bedroom antics. She’s also one of the first to accept and acknowledge Toula’s brother Angelo (Joey Fatone) is gay and can’t help herself but try and take charge when Toula’s parents discover they were never really married. Whether Vardalos wanted to show that Greeks love drama or not her screenplay just seems a little overcrowded with all the subplots that come with this film. As well as the already mentioned plot Paris is encouraged to find a husband before she gets too old, Maria (Lainie Kazan) refuses to marry Gus (Michael Constantine) unless he proposes properly, which actually is quite heart warming when he seems genuinely heartbroken the woman he loves gives him such a hard time over it. We also have Gus’s long lost brother show up for their wedding after years of not talking to each other because Gus left their beloved Greece.

Gus is still adamant that every word uttered somehow originated from Greek and he has passed this onto his grandsons, all the while telling anyone who will listen and try to prove it that he is actually a descendant of Alexander the Great. Vardalos has tried to create that same old look into the Greek family culture we witnessed with the first but whilst the comedy involved would have been great on the TV it seems to fail to translate to the big screen, although anyone from a similar cultural background watching this film will almost certainly relate.

My Big Fat Greek Wedding is out in Cinemas March 25