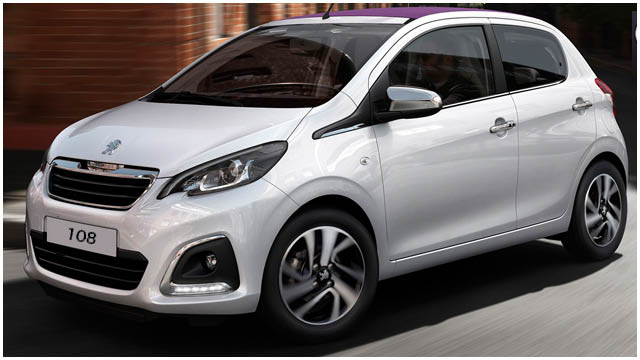 Looking for a new car? Whether you’re in the market for a new car or an upgrade, our Peugeot 108 review answers all of your initial questions. The only thing left to do is to book a test drive and see for yourself.

We got our resident staff writer and ITV’s undriveables Siobhan Copland to give the Peugeot 108 a test run. Having the car for a whole week Siobhan gives us the lowdown on the Peugeot 108.

Siobhan: I’m not sure whether it was the excitement of finally getting on the road solo, or the prospect of removing my ‘undriveables status’, but as soon as I saw the new Peugeot 108. I knew we were a good match; she looked like a car I could handle.

See, I’m already acting like a real driver, by gendering the vehicle. She [Peugeot 108] was compact, small, sexy and white, which I was hoping for. White’s so in now, you know. The car also had a lovely big sunroof, which felt like I was driving a convertible, well at least enough, to let my hair blow albeit when I’m fresh out of the salon. She also had sexy chrome detail around the doors and mirrors as well as sparkly chrome alloys, a small engine, which meant a full tank of petrol, would take me far over the next week. It was so economical.

So after a few supervised spins around the block with Flavourmag director LeonardWFoster, I was off and I even managed to manoeuvre a wave in as I set off. Click on the instagram post below to watch the video.

One of the great things about starting the car, was I didn’t need to use a key, a simple push of the button, and setting the biting point was enough to get me vrooming away.

The first challenge was finding my way home.

The model we had didn’t come with a built-in Sat-Nav, so I had to rely on google maps to guide me. Thanks to the car’s Bluetooth connectivity, I was able to hear the instructions through the car speakers, which believe me, is particularly useful to a new driver, as the last thing you want to be doing is glancing down on your phone, while trying to handle all the other controls.

I found the bluetooth connectivity to be a bit fiddly however, as at times it would get disconnected as I had so many notifications coming through my phone at the time. I’d have to fiddle around with a few buttons to get it working again. But I’m sure once you get the hang of it, it will be just fine. I would suggest getting the Sat-Nav option with the car. You won’t regret it.

One of the things I was looking forward to when driving, was being able to listen to my favourite CD’s most of which have been buried away, since the takeover of mp3’s.

I was a little disappointed that it didn’t come with a CD player, but neither did my MacBook, and most modern technology now, no longer incorporates them. I could live without it, and being able to play from my phone, or MP3 player or tablet via bluetooth, was a good substitute.

There’s also a usb port as well as an in-car charger port, so you need not worry about your phone battery running our while you play your music via the bluetooth.

Parking was easy, and a particularly useful function is that the Peugeot 108 has a rear-view camera and a TV display on the dashboard when you put the car in reverse. This meant I could see the road and pavement easily while parking, which is perfect for us new drivers that aren’t so confident at parking.

I found it helped me park with ease, and I managed to park in my drive straight first time. #proudmoment.

One the first day, I decided to brave the roads in the night. Of course I knew my highway code, but I was still a little unsure about which lights to use, out of fear of glaring other road users. However thanks to the automatic light function, which turns the car’s front-lights on for you when it get’s dark, I drove more confidently.

It’s the little things, that make life easier and not having to worry about turning on the car lights is one of them.

Out with the family

The following day I decided to pick my Nan up and take her to lunch. She has disabilities, and worried that the seating would be too low for her to get in and out of and that her wheeler, wouldn’t be able to fit in the boot.

My Nan got in and out comfortably, the seats adjusted easily, and despite the boot looking very compact, I was able to load and take out the wheeler with ease. The Peugeot 108 definitely got the Granny rating.

Shopping One of the perks of having a car, is being able to throw your shopping in the boot as well as doing bigger shops than you would usually being on foot. No more standing at bus stops in the rain laden with bags, and thanks to the Peugeot 108 being a four door car, with great boot space, I could literally shop till I dropped. The biggest test for space, was when a friend and I set off to do  a car boot sale. Making the Peugeot 108 our virtual shop. Guess what? We loaded up 3 bin bags, 3 laundry bags and 2 clothes rails, with 2 passengers. So as little as she may look, our lil 108 took a great load!

Making the most of the last day with the #peugeot108 with a boot sale. Defeated by rain! @PeugeotUK #peugeotflavour pic.twitter.com/rtofCw9Zcs

I drove 300 miles in the week I had the car and it only costs about £40 in fuel, which means more money for me to spend on fashion and beauty products lol. The car performed very well under different conditions, tackling London’s busy roads during rush hour, night-time, out of London and even driving down the motorway for a trip to the seaside.

Overall, my experience driving the 108 is very positive and I would seriously considering getting one for my first car, especially with the current offer just add fuel below.

Peugeot 108 – the easy way to your first car

Just Add Fuel® is now available on all 108 models for customers from the age of 18, with the addition of a telematics box. 18-year olds can be either the policy holder, or a named driver on a parent’s insurance policy, depending on who is the main driver of the car. A further additional benefit of Just Add Fuel® is the opportunity for customers without No Claims Discount to take advantage of Just Add Fuel®, on all 108 models. Click here for more and watch the video below.

Visit www.peugeot.co.uk now and you can download the prices and tech spec here.