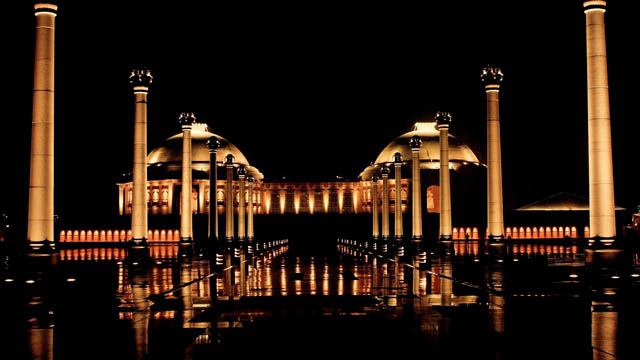 While searching the world wide web, looking for something fun and exciting to do in the new year we were lucky enough to stumble upon www.railbookers.com and found this fantastic holiday called the Mystical India Rail Journey.

The Mystical India Rail Journey is an 8 Night Deluxe Holiday by Air & Rail and will see you start in New and Old Delhi with time to experience the contrasting ancient and modern aspects of both cities. Then you’ll catch the Shatabdi Express to Agra, for a 2 night stay in a hotel overlooking the Taj Mahal. From here, travel to Jaipur and take a ride by elephant and jeep up to the magnificent Amber Fort before returning to Delhi.

Check out the itinerary below

Fly from London to Delhi with British Airways on an overnight flight arriving in Delhi for breakfast.

On arrival in Delhi, transfer to The Oberoi New Delhi where you will check in for a 2 night stay.

Welcome to India! Spend your first hours here unwinding from your journey and acclimatising to the bustling city of Delhi. You might like to set out and explore at your own leisure or alternatively you may prefer simply to relax and take advantage of the hotel’s leisure facilities.

After breakfast you are met at the hotel and taken on a tour of Old and New Delhi. Take an exciting cycle rickshaw ride through Old Delhi. Highlights along the way include the Red Fort, the most extravagant palace and fort of the Mughal Empire, Raj Ghat, a memorial to Mahatma Ghandi and Jama Masjid, the largest mosque in India. Outside the Red Fort, see the colourful market of Chandni Chowk which was once the commercial centre of Delhi.

Return to New Delhi aboard the modern metro service, offering a stark contrast to the ancient city. Here, visit Humayun’s Tomb and Qutub Minar before driving along Rajpath, the ceremonial avenue past India Gate and the Parliament House of India.

After an early morning tea/coffee at the hotel transfer to the railway station in Delhi to board the Shatabadi Express train to Agra. This journey to Agra is about 2 hours long and you will be served with breakfast on board the train.

On arrival, head off your excursion to Fatehpur Sikri, the imperial city of the Mughal dynasty an hour’s drive outside Agra. After the visit drive back to Agra and upon arrival check in at The Oberoi Amarvilas Agra and relax.

In the late afternoon, enjoy Mughal Heritage Walk, which offers a unique interactive experience that gives a rare behind the scene glimpse of one of the world’s most treasured tourist attraction and its people.

Enjoy breakfast in the hotel before meeting your guide for a full day tour of Agra. Your first stop in this historic city is the iconic Taj Mahal, just 600 metres from the hotel. It is believed that it took 20,000 craftsmen around 18 years to complete this iconic monument to Shah Jehan’s beloved queen.

You will also visit the UNESCO World Heritage listed Agra Fort, a royal residence and defensive fortress dating back to the 11th century. At the end of your visit here you are free to continue exploring Agra by car. Alternatively return to your hotel for a drink overlooking the Taj Mahal as the sun sets.

You have a free morning today to relax or continue your exploration of Agra. Perhaps visit Itmad-Ud-Daulah’s Tomb, sometimes called ‘Baby Taj’ or the Mankameshwar Temple which is surrounded by bustling labyrinthine markets dating back to the Mughal era.

Later in the afternoon, you are met at your hotel and transferred back to the station for an onward train service to Jaipur. There are snacks and hot drinks available on the train for your 3 hour journey. On arrival in Jaipur, transfer to The Oberoi Rajvillas, Jaipur and check in for a 2 night stay.

Known as the ‘Pink City’, Jaipur is the colourful state capital of Rajasthan. You will be taken on a half day tour this morning to the majestic Amber Fort, a magnificent example of Rajput architecture with its ramparts and terraces reflecting in the Maota Lake below. Your tour includes a ride on an elephant!

In the afternoon, see the sights of the inner city with a tour by air conditioned car. Visit the City Palace Museum, the Jantar Mantar observatory and the Hawa Mahal (Palace of Winds) where there will be time for a photo stop. After your tour, return to the hotel for a relaxing evening at your own leisure.

Spend your day exploring Jaipur independently. You might like to use your car and driver to shop in one of Jaipur’s bustling markets, or perhaps visit one of the city’s museums, such as the imposing Albert Hall Museum.

Early in the evening, transfer to the station at Jaipur and re-board the Shatabdi Express for your journey back to Delhi. Dinner is served on board as you travel through rural India. Arrive late in the evening into Delhi, meet your driver and transfer to The Oberoi New Delhi for your final night.

Check out of your hotel this morning and transfer back to the airport for return flight to London from Delhi.

You’ve got to admit that this isn’t your usual holiday and to be fair we haven’t seen many holidays like this. So its time to pack your bags and do something different and embark on an unforgettable 8 night journey through India.