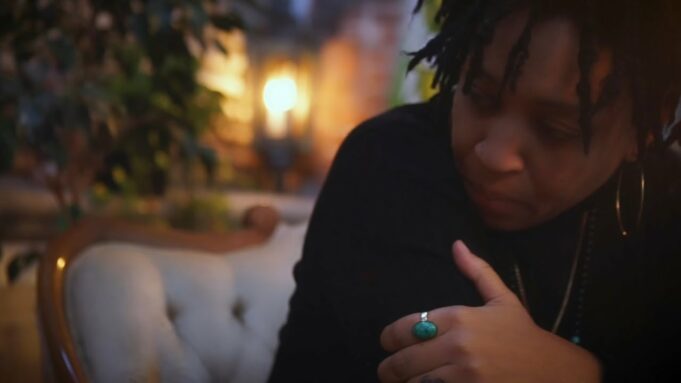 It has been a while for the LA-based singer to release music. She first came onto the scene with her album INK in 2010. In truth coming onto the scene (as a debutant of sorts) was huge. On Executive production on the album was the renowned Dave Stewart from the iconic band Eurythmics.

As is the case life can throw spanners. While she has been putting out music to a degree, Nobody’s Coming seems a line in the sand in this moderate hiatus.

We got time with the artist to talk about that hiatus and her new single.

Tell us a bit about you and your background into music?

Jamaican singer Andy Livingston introduced me to Sly Dunbar (Sly and Robbie). Two singles came from that collaboration and then things progressed quickly. Management came from Steven Ventura which led to becoming a winner of CME (Caribbean Music Expo). After an anchor performance at Chris Blackwell’s Island Village in Ocho Rios Brian Jobson introduced me to Dave Stewart who was in the audience. From there I was signed and the rest as you can imagine is a whirlwind.

Growing up in Jamaica with its connection to music, how did that impact you and the music you were drawn to?

My parents always played a very eclectic mix of artists, it would go from Jimmy Cliff to Tom Jones to Dolly Parton. It was a home filled with music playing always. My Brother was a DJ, he had his own sound system and I would go with him to parties. He started buying me records from artists like Jungle Brothers, Queen Latifah, MC Lyte and LL Cool J. I fell in love.

Talk to us about being a poet as well and in fact what came first a poet or a rapper?

Poetry came first, my older sister Safa would always be writing poems. It inspired me to use the pen to express myself. Everything I write begins as a poem. My approach to writing a song is usually without a track. I may listen to the track first, but I write in mostly silence, once the emotion is felt it comes pouring out without structure and then I arrange it after.

Tell us how you hooked up and worked with Dave Stewart that is huge as a first album?

Yes, so like I said previously, I was signed by Dave Stewart and relocated to the UK where we recorded a project called DA UNIVERSAL PLAYAZ which was primarily Gary Mudbone Cooper, Dave Stewart, and myself. We toured Europe with guest artists, Jimmy Cliff, Candy Dulfer, Joanne Shaw Taylor, and others joining us on stage. The album was later released as Fresh Mud (we opened for Pink on her I’m Not Dead Tour). I then moved to LA, California where I began work on my solo project Executive Produced by Dave with production from Glen Ballard (Alanis Morrisette, Michael Jackson), Ned Douglas and Michael Bradford.

Your album Ink tells us a bit about that and working with Annie Lennox too?

An amazing experience. Dave said I could pick any Eurythmics song I would like to sample for the album. I chose Love is A Stranger, eventually, Dave said how about Here Comes The Rain Again. We used Annie Original recording as well as the strings etc Dave and Ned Douglas worked their magic on production and my single Here it Comes was born. Glen Ballard was producing Annie’s Songs of Mass Destruction album at the time and she asked if I would be interested in recording a song with her on her album. I wrote for two songs SING and WOMANKIND I am thankful I made the cut. I was featured on WOMANKIND which is one of my proudest moments seeing that I am a fan that got to collaborate with Annie. The recording session was wonderful, just all-around great energy.

It’s been a while since your last album, and we saw in the press release about falling out of love with music-what happened there?

I think everyone no matter what your passion is whether you are an accountant or performing artist you eventually feel the need to re-align somewhat. I dived way deeper into being a mom and wife and the time flew away, so even though I was always creating/writing it didn’t fully connect with my soul as it used to. Life presented cycles that allowed for the kind of growth I needed as a person and artist. So, it may seem like a long time, but for me, I think it was necessary to have had all the experiences I had. Love and happiness abundance came with heartbreak and disappointment. Things caused by expectations I suspect. I’m still a work in progress. To whom much is gives. Right?

You are back-talk to us about Nobody’s Coming and of course putting out music after a bit of time out?

The words for Nobody’s Coming were written quickly for me observing and in some sense absorbing the chaos ensuing on the planet. Religion, violence, racism, colorism, classism all the isims going on and we still have not been rescued. I thought “whoever or whatever dropped on this planet isn’t coming to check on us, are they? LOL. We must do this healing, this course correction on our own, beginning with what’s happening within us, we must save ourselves. Olaf Blackwoods’ vocal interpretation of this in the chorus still gives me goosebumps. He is such an amazing human being, filled with kindness and a deep sense of our humanity and of course what a voice. Very blessed to have him on this track. Ned Douglas (who is producing my entire new album) of course laid his magical heart and soul on the production and here we have Nobody’s Coming.

What else have you got coming up in terms of music?

Taking one song at a time. I am a slow brew LOL, but we do have some amazing collabs. One coming up on the next single is the legendary Chali 2NA (Jurassic 5).

Anything you want to add?

Just spread the word and stream Nobody’s Coming feat. Olaf Blackwood, watch the video subscribe and all that goodness. More fire on the way!!!!