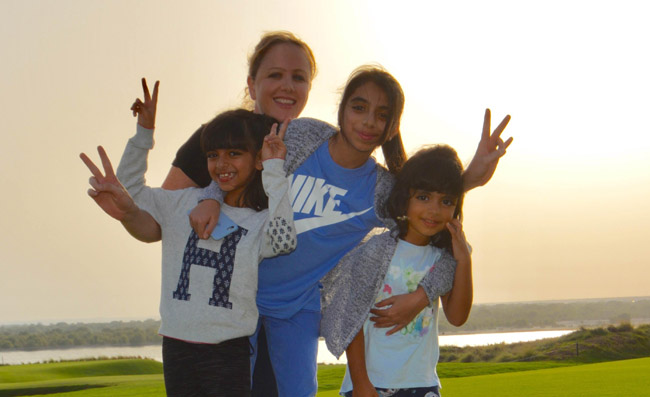 Nanny Culture is a documentary that tells the story of a British Nanny (Julie C. Mcilvenny) who moves to the United Arab Emirates to look after the children of a wealthy family.

Set up’s for fish out of water tales don’t come much better than this; the potential is squandered in spectacular fashion however due to a number of bizarre and clumsy filmmaking choices.

Another famous nanny – Mary Poppins famously sung her way into our hearts in 1964 – but it’s a spoon full of manipulation that helps to bring this documentary crashing down. As it leaves you wondering if you’re watching one big infomercial for the United Arab Emirates tourist board – or indeed a recruitment video for potential Nanny’s wishing to work abroad.

The documentary felt very staged to me, right from the opening moments when the nanny conveniently mentions to the film crew – “that if they really wanted to see a nannies job they should follow her to the UAE”. The dialogue felt coached – the events felt scripted and while all documentaries are engineered to some extent – even in something as innocent as directors sequencing their shots in a certain order to tell a story. The heavy hand of contrivance rears its head too many times to ignore in Nanny culture. In one scene when questioned by one of the maids as to why she is not wearing a uniform; the nanny literally turns to the cameraman and questions whether the director told the maid to ask that “ because she would never ask the question by herself”. It creates a very uncomfortable demeaning moment and perhaps the documentaries most entertaining – as it’s veil of disingenuous pleasantness slips for the first time.

The technical aspect of the documentary is poor as well; there are occasional sound problems, the camera equipment often appears in shot. And perhaps most bizarrely of all, the ‘British’ Nanny shuffles about with what appears to be a South African accent – looking at the camera directly with such a smarmy grin – that you wonder are you actually watching a mockumentary.

Perhaps if it had been Nanny Gervais setting people up for some awkward humor – I could give this documentary some credit for the often cringe-inducing scenes it subjected me too. As it stands, however, you have to wonder whom exactly is it aimed at and what exactly was its intention. Presented in a Channel 4 Supernanny reality TV series type of format, I have no doubt that it could find an audience. But as the 80-minute feature form that I viewed it as, funnily enough, it needs something that Nannies are famous for giving – some much-needed discipline.