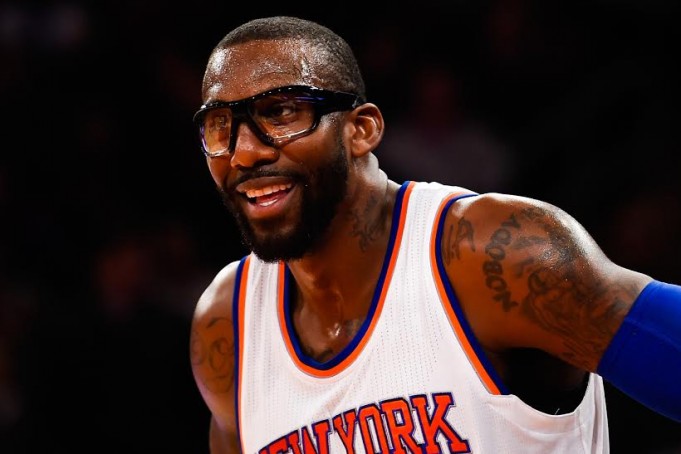 I would just like to ask you about the changes over the summer and obviously about Fisher and Phil Jackson’s involvement at the club. How do you think that’s impacted the team already and do you see an impact going in to the season starting in a couple of days?

Amar’e: Ye it’s been great having Derek as our head coach and Phil as our president, I think it’s been a great atmosphere, the guys are really keying in and paying attention to detail. We’re focusing on excellence and trying to become a better basketball team, so things have been going well.

Coming towards the new season and coming towards London, Having a player settling in as a coach, Brooklyn had that last year and had a bit of an issue at the start but around the period of coming to London they managed to switch things round.  Do you think you guys will be able to start strong at the start of the season or do you think it will take a bit of time?

Amar’e: Well you know I would love to say we’re going to start off great this season but you just never know, we’re still trying to figure out the strategies at both ends of the basketball court. It’s going to take a bit extra time to get it all sorted out but I think for the most part we’re putting forth the effort which is the main ingredient and I think it’s a good time for us to really get it going so I think in a few weeks or so I’m thinking we’ll be able to show an improvement.

How was your trip this summer to Israel for your basketball academy and your trip to Africa? But also, how excited are about coming back to London?

Amar’e: Well the trip to Israel for my basketball academy was unfortunately postponed, due to the circumstances. However my trip to Africa was phenomenal; I had a great time in South Africa. We truly took a trip around, through Johannesburg, cooper national park and also to Cape Town and joined some people for some South African wine; it was a very, very good experience.

Will be seeing you build an academy in South Africa in years to come as well?

Amar’e: You never know but I am excited about coming back to London, having done a movie with an actress from London. I think it’s a great prospect to get back there and enjoy her home town; London is definitely a place I like to visit and I’m fond of.

Your life is truly inspirational as a basketball player, father, husband and also a style icon. How important is it for you to get your story and message across to the youth?

Amar’e: Well it’s very important; because the sky is the limit, once you put your mind to it, you work for it; you understand that education is the priority probably the main thing you should strive for then everything else comes after that. It’s great to be someone of a positive influence to the youth.

This summer you launched your book “Cooking with Amar’e” what is your favourite recipe and why?

Amar’e: Yes I did, “Cooking with Amar’e is a book I have a lot of passion for, being able to cook is very good for a husband, for a man and also for your children. My favourite recipe in the book is probably the fish tacos.

Can you tell us a little bit about what it was like to have Steve Nash as a team mate at the Phoenix?

Amar’e: It was brilliant. Steve Nash is really a remarkable basketball player and to have played with him is always something I will tell my children and my grandchildren about, playing with Steve was a dream comes true; he made the game so much easier for all of his team mates. He was a true professional he knows what it takes to work hard and persevere through any injuries so that’s always a story I will tell to my children.

Coming to London again, do you think that more regular season games should be played out of America?

Amar’e: I truly enjoy playing in London I really wish we could play there every season, but again it’s up to the commissioner to come up with that but I do truly enjoy coming to London for sure.

The tickets for the London game go on sale later this week, what do you think the fans can expect from New York and Milwaukee when they come to London?

Do you think you guys in New York have what it takes to make the play-offs this year?

Amar’e: I think that we’re definitely striving for the play-offs, with the team we have we’re feeling confident that we can make that happen, but again there is a lot that can go on between then and now, we have a good team to improve, we’ve got to keep improving as players and as a team

With the NFL considering a franchise team here in London in years to come, do you think it is about time that the NBA followed with the popularity of the NBS here in the UK and across Europe?

You mentioned that you love coming to London, what advice would you have for your team mates who haven’t been here yet?

I think the first thing they should do is go to see all the sites, there are so many historical sites that they should see from a cultural stand point so I will definitely try to be their tour guide.