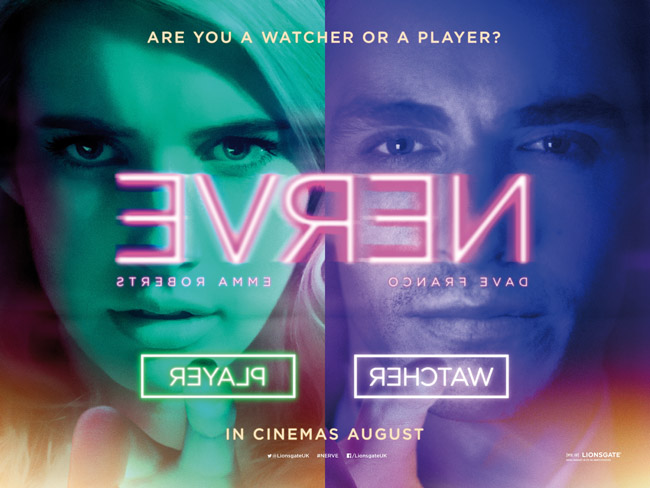 It’s not very often when a film actually ties your stomach in knots and makes you feel every last second of what’s playing out in front of you. Nerve ticks both those boxes. It, without a doubt, lives up to its name.

Nerve is based on a hugely popular young-adult novel by Jeanne Ryan and captures the very essence of the power that social media has on the younger generation, one in where likes and the number of followers you have makes you online famous. It’s also full of high octane thrills and edge of your seat action but is broken up with the right dose of light-hearted humour. With the majority of the film set over the course of one night, Shy and boring Vee Delmonico (Emma Roberts) usually plays it safe, but with the buzz surrounding the online game Nerve, an adrenaline pumping competition that is streamed to thousands online, and pressure from her do or die, friend, her life is about to change.  Signing up to Nerve, in which you choose to be a Player or a watcher, Vee ops for Player, and begins to carry out thrill seeking dares for money until she meets the handsome young stranger Ian (Dave Franco).

Once the pair has teamed up things really start to get interesting as each new dare becomes even more dangerous but with a higher reward price. We see the pair run virtually naked through a department store after their clothes are stolen to riding a motorcycle blindfolded. This is where the action starts to build, bringing with it the ability to keep its audience on the edge of its seat. The nervous tension connects with the characters as they, especially Vee, begins to regret getting involved with the game. However, leaving the game comes at a price, one that sees not only her family in financial ruin but puts her life at risk. In a time where the majority of teens live their lives on the internet, mostly through a smartphone, Nerve couldn’t be any more socially relevant if it tried. Directed by the makers behind Catfish and Paranormal Activity 3, Henry Joost and Ariel Schulman have stuck with what they know best, how people behave online. Whilst being one person, in reality, online giving people the license to be someone they want to be, sometimes not always with the best results, what starts out as fun could just very well turn into a life-threatening nightmare.

Nerve goes from a playful and lighthearted plot with a potential love interest in a sexy stranger and like a speeding bullet everything changes to the more sinister and dark. The faceless villain isn’t played by one single character but a collective of watchers and no one knows who’s truly in charge, Nerve is nothing but refreshingly unique.

Nerve is out in cinemas August 12.