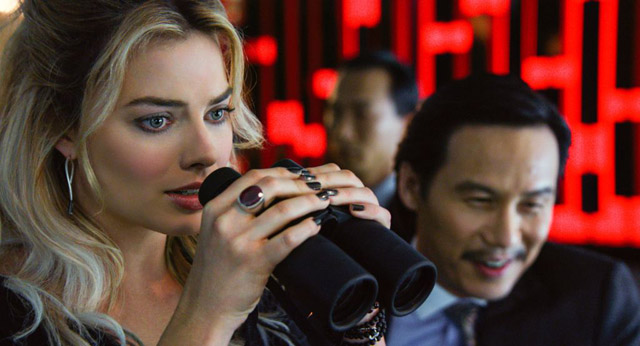 Nicky (Will Smith) has been in the con artist game for most of his life thanks to his Dad, after a meeting with Jess (Margot Robbie, against his better judgement decides to take her under his wing and teaches her the tricks of the trade. However after the pair become romantically involved Nicky has second thoughts about how close they are becoming and realises he needs to keep his focus on his craft and ends their relationship. Fast forward three years, Nicky is in Buenos Aires working a scheme to end all schemes when Jess, now an accomplished femme fatale, unexpectedly shows up. Her appearance throws Nicky for a loop at a time when he cannot afford to be off his game putting the whole heist in danger.

Focus is a slick and sophisticated heist movie, full of witty lines, tense drama psychology and intrigue. Smart and Sexy is definitely a winner every time.

Jay (Maika Monroe) is just your normal young woman embarking on a new relationship, she couldn’t be happier, until that is one night of passion in the back of her boyfriend’s car when her whole world dramatically falls apart. It soon unfolds that this sexual encounter was all a just a set up to pass on a horrifying entity that follows her around, taking on the form of disturbing visions. Jay needs to decide whether she can keep running to save her life or sleep with someone in order to pass on this thing of horror and let it be someone else’s problem.
IT Follows is a horror for the new generation, each scene has that ominous foreboding which keeps you constantly on the edge of your seat, spooky enough to keep a chill in your bones and certainly lingers with you long after you’ve finished watching.

See if you liked: Cabin In The Woods, Urban Legend

Laila (Sameena Jabeen Ahmed) a girl in her late teens has run away from her very strict Asian family with her English drifter boyfriend Aaron (Connor McCarron). Shacked up together in a Yorkshire town on the edge of the moors; they live hand to mouth to simply exist. Aaron is AWOL from the army, while Laila’s family won’t let her run without a fight. Two carloads of bounty hunters roll into town asking questions and flashing a photo of Laila; hard men hired by Laila’s father with her brother in tow to find her to bring her to heel for dishonouring the family.

Catch Me Daddy is an extremely gripping, disturbing and harrowing film and with an ending so open as to what happens after the camera’s leave the scene it will certainly cause lots of discussion and stay with you a long while after you’ve left the cinema.

THE BOY NEXT DOOR

When a handsome, charming teenager named Noah (Ryan Guzman) moves in next door, newly separated high-school teacher Claire Peterson (Jennifer Lopez) encourages his friendship and engages in a little bit of harmless, or so she thinks, flirtation. Although Noah spends much of the time hanging out with Claire’s son, the teen’s attraction to her is palpable. One night, Claire gives in to temptation and lets Noah seduce her, but when she tries to end the relationship, he turns violent.

Jennifer Lopez isn’t known for making great movies and I’m afraid this isn’t going to change that fact, this is nothing more than a cheesy, laughable, awful, lazy and low budget psychological thriller that really if they had to make it should have gone straight to DVD.

See if you liked: Obessed, The Resident.

The Second Best Exotic Marigold Hotel is the expansionist dream of Sonny (Dev Patel), and it’s making more claims on his time than he has available, considering his imminent marriage to the love of his life, Sunaina (Tina Desai).

Jam packed full of British actors such as Judi Dench, Bill Nighy, Celia Imrie, Maggie Smith oh and Richard Gere (randomly), this is one sequel that’s actually worthy. It’s warm, positive and has humour in abundance of course it has its flaws but its sassy and extremely watchable.

See if you liked: Quartet, The Best Exotic Marigold Hotel.

OUR PICK OF THE WEEK: FOCUS.