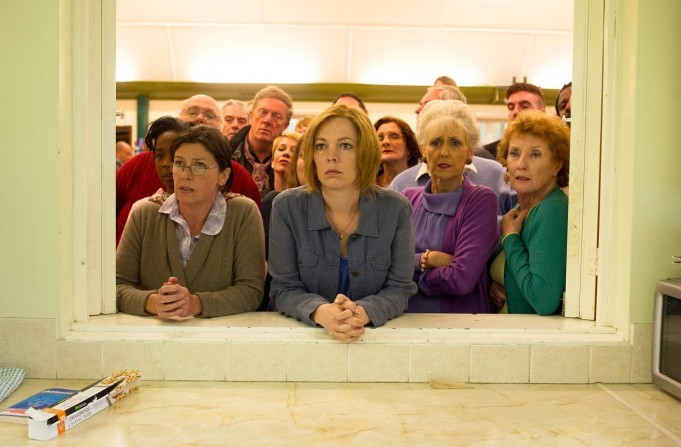 I’m Zehra Phelan, Flavourmag’s resident Film Editor and Entertainment Journalist, each week I bring you my weekly roundup of new movies out in cinema. This week we have a pretty thinly veiled week of films with any kind of creditability.

We’ve got a blockbuster in the form of Jurassic World and three independent British films which include a musical thriller in London Road starring Tom Hardy, Age of Kill with your normal hard man actors and a very disappointing horror in Unhallowed Ground.

Visitors at the Jurassic World theme park run for their lives when the genetically engineered Indominus Rex and other dinosaurs go on a rampage.

The one major thing missing from this franchise comeback is Steven Spielberg, his absence in taking the lead is missed however, visually with its CGI dinosaurs it’s pretty impressive. The story is pretty bland though. This might just be a question of should this be another one of those franchises that should have been left alone?

LONDON ROAD documents the events that shook Suffolk in 2006, when the quiet rural town of Ipswich was shattered by the discovery of the bodies of five women. The residents of London Road had struggled for years with frequent soliciting and kerb-crawling on their street. The film follows the community who found themselves at the epicentre of the tragic events. Using their own words set to an innovative musical score, LONDON ROAD tells a moving story of ordinary people coming together during the darkest of experiences.

Starring Tom Hardy, singing this has got to be a must see. This is a musical thriller which doesn’t just thrill but has the right amount of light humour to keep you chuckling. It’s engaging and thought provoking. This is certainly a surprise you don’t see coming.

See if you liked: Sweeney Todd: The Demon Barber.

A black ops sniper is blackmailed by a psychotic international terrorist into killing 6 unrelated people in 6 hours… but there is more to the victims than meets the eye.

A British thriller starring Martin Kemp, Dexter Fletcher, Philip Davis and much other familiar faces from the world of British “gangster” films, shows it’s not short of the usual suspects but Kemp could just show he is a new action hero for the big screen.

See if you liked: Vendetta, The Fall of the Essex Boys.

A group of privileged students spend a night patrolling the prestigious Dhoultham school. However, it soon turns into the worst night of their lives as they face off against burglars, supernatural spirits and a deeper, darker evil.

A British teenage horror which is by far anything but scary, the only good thing going for this is the storyline but the acting, dark lighting which is always a must in any horror and lack off a big budget has let this film down completely, it all felt a bit too awkward.

OUR PICK OF THE WEEK: LONDON ROAD