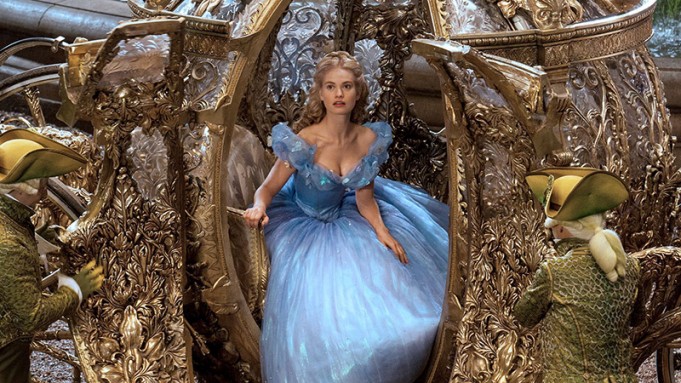 CINDERELLA
Ella (Lily James) loses her mother as a child, She’s the typical Daddy’s girl and adores him, He soon remarries and Ella gains an evil stepmother in the form of Cate Blanchett, who also has two daughters of her own, Anastasia (Holliday Grainger) and Drisella (Sophie McShera). Ella’s father unexpectedly passes away and she finds herself at the mercy of her vain and cruel new family, being treated no better than a servant.  After being renamed Cinderella, she refuses to let her dire circumstances get her down and when the palace sends out an invitation to the whole town to attend a ball, Ella gets her chance with the help of her fairy godmother (Helena Bonham Carter) to attend the ball and dance the night away with her prince charming leading to her life never quite being the same ever again.

Cinderella is quaint, over acted and extremely corny with a few funny one liners here and there but then why take this too seriously? It is a fairytale after all; we need that corny escapism from time to time.

James King (Will Ferrell) is a delusional millionaire hedge fund manager who very quickly gets nailed for fraud and after a court finds him guilty is looking at a stretch in San Quentin; the judge gives him 30 days to get his affairs in order.  Desperate, he turns to Darnell Lewis (Kevin Hart) to help him prepare for a life behind bars.  But despite James’ blinkered assumption that he is black so he must have been to jail, Darnell is a hard-working small business owner who has never received a parking ticket, let alone been to prison.

Together, the two men do whatever it takes for James to “get hard” and, in the process, discover how wrong they were about a lot of things – including each other.

If you we want to make comparisons then think, the 80’s film Trading Places but a hell of a lot cruder and not quite as smart but overall, you may not approve ethically of this films content but it’s just a fun, enjoyable film.

See if you liked: Ride Along, Trading Places.

Centuries ago, a supernatural champion named Master Gregory (Jeff Bridges) defeated Mother Malkin (Julianne Moore), a malevolent witch. Now, she has escaped imprisonment and thirsts for vengeance. She summons her followers and prepares to unleash her wrath on humanity. Only one thing stands in her way: Master Gregory. Gregory takes Tom Ward (Ben Barnes) as his new apprentice, but he has only until the next full moon to teach Tom what usually takes years: how to prevail against dark magic.

This is just a bit of a mess really, thankfully it doesn’t take itself too seriously but that doesn’t mean it’s at all funny.  The main emphasise for this film was obviously the 3D and visual effects as the storyline makes absolutely no sense, they just seemed to make a lot of references to middle earth etc etc. Should have really been made “straight for DVD” to watch on a dark, rainy Sunday afternoon.

See if you liked: Hansel & Gretel: Witch Hunters, Season of the Witch.

THE SPONGEBOB MOVIE: SPONGE OUT OF THE WATER

Life is dandy in Bikini Bottom for SpongeBob Squarepants (Tom Kenny) and his friends Patrick (Bill Fagerbakke), Squidward (Rodger Bumpass), Mr. Krabs (Clancy Brown) and Sandy (Carolyn Lawrence). However, when the top-secret recipe for Krabby Patties is stolen, SpongeBob finds that he must join forces with perpetual adversary Plankton (Mr. Lawrence) and come ashore to battle a fiendish pirate named Burger Beard (Antonio Banderas), who has his own plans for the delicious delicacies.

This is a bit of a guilty pleasure, you’re not going to want to own up in liking this but you won’t be able to help yourself. Its daft, hilarious, surreal and very much in your face. The makers of this film are either complete utter lunatics or were high on drugs; nonetheless it’s certainly an entertaining animation.

SEE IF YOU LIKED: The Spongebob Movie, Rango

OUR PICK OF THE WEEK: GET HARD