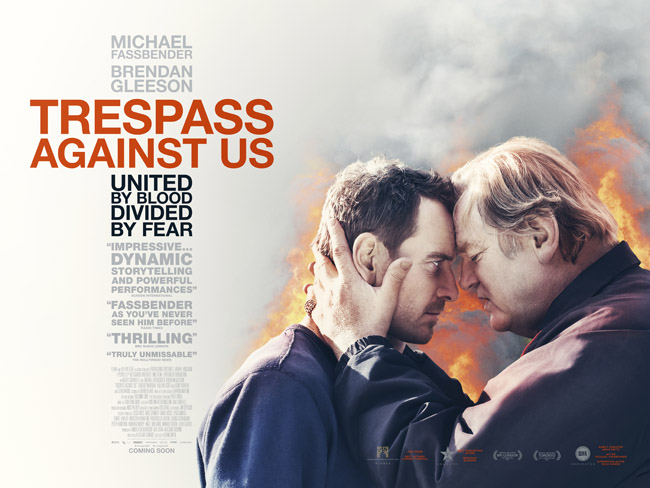 Lionsgate has released a gripping new trailer and poster for Trespass Against Us which stars Michael Fassbender and Brendan Gleeson.

Part of the Official Selection at both the BFI London Film Festival 2016, and the Toronto International Film Festival 2016, the film also won the Jury Prize for Best Actress (Lyndsey Marshall) at the 1st International Macao Film Festival. More recently, the TRESPASS AGAINST US picked up nominations at the 2016 BIFA awards for Debut Director (Adam Smith), Actor (Michael Fassbender), and Supporting Actor (Sean Harris), along with a nomination for Brendan Gleeson (Best Supporting Actor) at the Evening Standard British Film Awards.

TRESPASS AGAINST US follows three generations of the notorious Cutler family live as outlaws in the Cotswolds, the heart of Britain’s richest countryside. The Cutlers live by their own rules, practising their own way of life—poaching, pilfering and provoking the police. Chad (Michael Fassbender) finds himself torn between respect for his archaic father, Colby (Brendan Gleeson), and a desire to forge a better life for his children. When Colby coerces him into a major robbery one night, Chad is faced with a choice that will change his life forever.  Should he follow tradition and do his father’s bidding as his rightful son and heir, or should he break the chain and set out on a new path?

With the law cracking down on the clan, Colby tightening his grip on the family, and prejudices among the local populace becoming ever more hostile, Chad discovers that his destiny may no longer lie in his own hands…