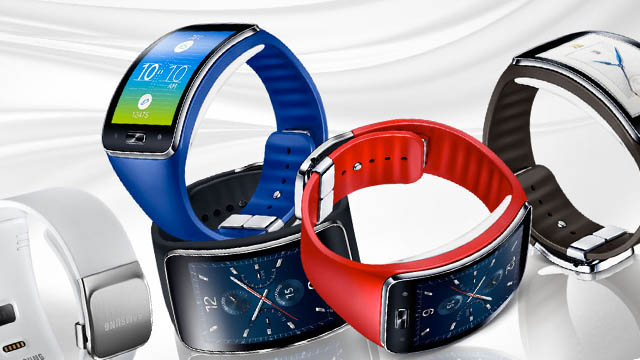 In late 2014, Smartphone giant Samsung announced the release of its latest addition to its SmartWatch collection. The Gear S! This newest Samsung is the only one in its line of SmartWatches that can operate as a stand alone mobile phone, independent from a paired main device. Lets consider the stats first…

When I first tested the Gear S, I primarily used it as a stand alone device. However, it does need to pair with a compatible Samsung phone initially in order to set it up. I did the initial set up with a Note 3 I had hanging around. But after that I no longer paired it with that phone. I am a Nokia/Windows user, so after set up, I forwarded all calls from my phone to the watch. Which worked beautifully. I could leaving my device in the locker at the gym and didn’t have to worry about missing a call. Texting is rather easy using the voice dictation. But when it comes to typing on the small on screen keyboard, fat fingers beware. You’re going to need to have ninja precision.

Out of curiosity, I tried to Bluetooth pair my phone and watch together. And what happens is the same thing that will always happen if you pair the watch with any incompatible phone… It master resets and erases any data you had on the watch. Though I soon came to learn that there is a way to unlock the watch’s limitation to pair with only compatible Samsung phones, though an action certainly NOT Samsung approved.

The watch is water resistant, and does have on board health monitoring. However, the heart monitor tended to be less than accurate. There is no earphone jack, so calls and music are either routed through the small speaker in the watch or through a Bluetooth headset/headphones. I eventually decided to acquire an older model Samsung phone to keep the watch paired to, just to get the most benefit out of it, but again, the watch worked just fine on its own. However, the battery could really be improved. After about 12 hours of having its Bluetooth and mobile network on, it is nearly depleted.

All in all, the Samsung Gear S is a big step in the right direction from the tech giant. And it may be worth the hefty price tag if you can really maximize the standalone AND paired features of the watch.