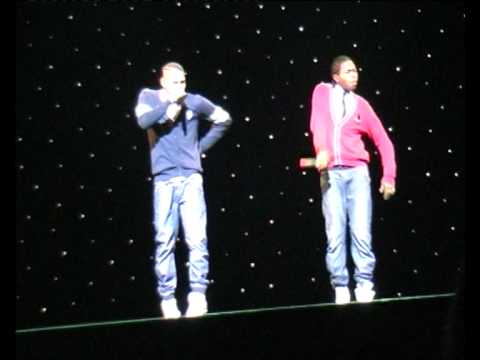 The fresh urban talent tipped to bombard 2011’s music industry with ease. I was honoured to be able to grab a few words from the up and coming duo tagged ‘ Misunderstood’ -and find out why there a were different from what the world has already seen. How they offered the fundamental attributes of being marketable and what creative ideas were floating in their minds. It was a pleasure getting to chat to both boys and see behind the artist on the screen if I don’t say so myself. Wow! To be honest I have researched ‘ Misunderstood’ and you are doing a lot of work within the music scene at the mere ages of?
S: Hi my name is Stephan and I’m 17 years old

J: And all the in betweens fun and silliness ( laughs) no really we’ll start off with a vocal lesson, then a dance session and then either recording sessions or a show!

S: Either way its jam packed with a lot of work.

J: Apart from singing and dancing we also do separate activities.
I like to go swimming and teach dance and yeah if it’s not music based then I’m not really interested.

S: Erm..I have a huge passion for gymnastics, and also like to do acting as well.

The expected yet urging question- when did you first get into music and when did you become a duo?
S: Well personally I wasn’t always a singer, I focused more on dancing. I was inspired by Justin Timberlake and Missy Elliott videos.
I don’t know when I started singing; I guess I was just heavenly influenced by artists such as Brandy and Chris Brown in my early teens.

J: Well I’ve been into music since I was in the womb (laughs).It was always played religiously in my household; I grew up and was heavily inspired by Michael Jackson. I started singing since 3 and did mini talent shows throughout my school days.

Misunderstood started when me and Steph decided to create something different and have people think the impossible.
S: We always were told we couldn’t do this or that because of XY and Z but we’ve kind of made it possible..

Have you ever considered going solo?(cheeky question that strikes a bit of controversy in a group)
S:Wow have we ever thought of going solo? That’s funny that you’d say that, we thought about it- but we feel there’s unique aspect of our abilities which makes us a strong duo.

J: And plus it’s too much fun to even think about being solo. We have that energy together that just won’t ever go away.

S:It was a huge and fun opportunity to be able to dance alongside new up & coming girl group ‘Ruff Diamonds’. The experience was something you just can’t explain in words. It felt like home that’s all I can say!

J: We might have only been backing dancing for them but we met so many people: Jessie J, Dappy (N-Dubz),Tinchy Stryder and Melanie Fiona to name a few who gave us such heart warming advice.

J: We loved every moment of it; especially being on an entertainment programme with your best friends. At the end of the day it’s all down to the public vote and if it wasn’t Myztikals time then another door will surely open. Myztikal gained so much love from the public and the show and we want to say a massive thank you to everyone that voted and supported.

S: Can you imagine being on the telly and doing what you love doing with all your mates?! If it’s that fun then surely it wouldn’t matter about winning-it’s all about the experience.

Your tags state your dancers, singers and songwriters what field would you say you take most seriously and enjoy the most?
J: One thing Misunderstood have grown to learn recently is to never limit yourself or ability. We take all of our crafts seriously.

S: There is so much out there and so much talent it’s hard to just stick to one; I guess that’s why our sound and genre is Pop/R&B.

It’s just a message we want to give to our fans, that they should never just believe they’re good at one thing.
J: There are millions of things out there; regardless of how weird or insane it may sound-it’s all about perfecting you. With us we don’t ever say we’re better singers or dancers and this is what brings us together as a duo.

S: If we were to answer that question we’d say Performing as there is no limit to that. You can sing, back flip, jump, and scream; as long as you’re entertaining then you’re doing the job.

J: And that’s what we believe we fit in and are better at.

Dot rotten is a great artist I am a follower of his music myself how did the collaboration come about
J: Well the hook up with Dot Rotten happened when I was in my Barber shop. My barber happened to know I was a part of a duo and knew if we’d got in contact with Dot he’d deliver us some street bangers. So he gave me his number and it sort of happened from there really.
Dot gave us an instrumental that he had made, and at the time we were getting ready to go to Germany to do some promotional work there.

S: We’d written the track over in Germany and just knew Dot would put his swag on it and it worked. We definitely want to be working with him more in the future. Our studio sessions with him were just jokes.

J: We hadn’t laughed so much in a session like that ever.

What are your goals for 2011?
J: The goal for 2011 is to let the nation know about Misunderstood.

S: We’ve been so hard at work in the studio since last year-we’re itching for you all to hear our material that you all have been so patiently waiting for.

J: Definitely. Were about to embark on our first school tour this spring, we also want to release a music video before the year ends and keep jumping on all these big shows!

S: But most of all to get our message across, because we do represent the youth of today, a lot of which are targeted and judged for the wrong reasons.

J: We want to show that being Misunderstood doesn’t necessarily mean it’s a bad thing-it’s about what you make of it.