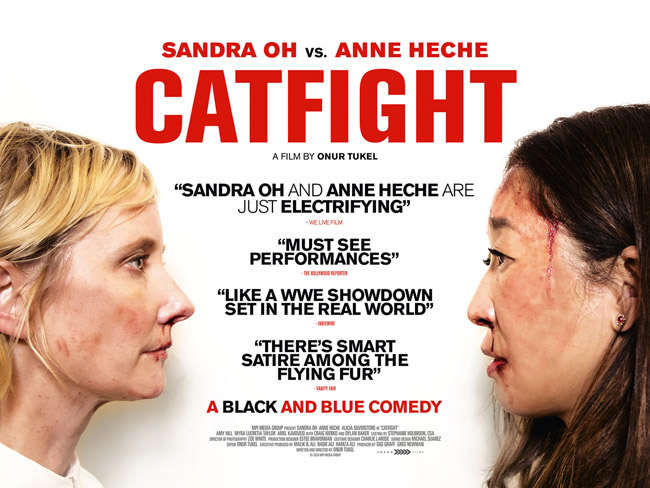 A new trailer for Catfight where Anne Heche and Sandra Oh give Mike Tyson a run for his money has been released.

Golden Globe winner Sandra Oh (Sideways) and Seven Days Seven Nights and Donnie Brasco star Anne Heche are on top form as former college pals whose unexpected meeting at a party escalates into an insane and violent rivalry. These two esteemed actresses in a bloody brawl in a stairwell is a sight to behold, and Sandra Oh’s coming out of a coma scene is a masterclass of gallows humour. The ensuing flip-flop in fortunes of the warring women is an on-target and topical treat that confirms Tukel as a brilliantly canny writer/director.

Struggling artist Ashley (Anne Heche) and wealthy housewife Veronica (Sandra Oh) were friends at college, but their paths have not crossed since. When they find themselves attending the same event (Ashley working as a waiter at Veronica’s rich husband’s party), their initial thinly-veiled verbal pleasantries soon take a turn, leading to an all-out brawl and all-consuming rivalry that will keep these two locked in combat for years.

With supporting appearances from Alicia Silverstone as Ashley’s lesbian love interest, and Dylan Baker playing an overworked coma doctor, Catfight turns the portrayal of women’s fights in movies on its head in the most violent of ways possible, landing a killer satirical blow at modern day society.