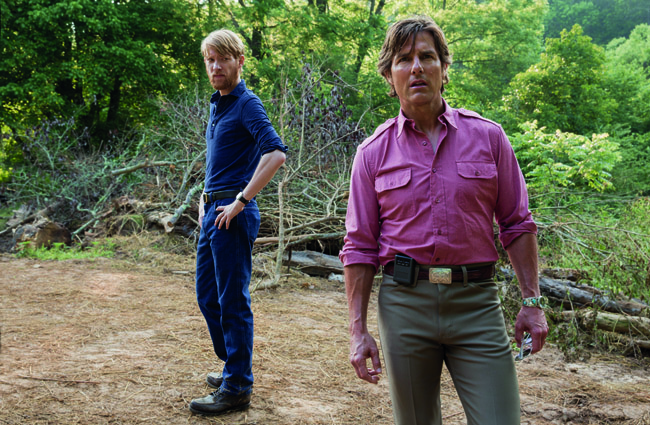 Just a few days away from the staple Tom Cruise action, The Mummy, being released into cinemas the international trailer for American Made, which features Cruise in a slightly different role than you’re used to has been released.

American Made sees Cruise reunite with the Edge of Tomorrow director Doug Liman on a story based on the real-life events of the TWO pilot Barry Seal, played by Cruise, in the midst of Ronald Reagan’s administration in the 80’s. This outrageous story is not from the imagination of any screenwriter what pans out is actually historically true. Seal was indeed a hustler and pilot who is unexpectedly recruited by the CIA to run one of the biggest covert operations in U.S. history.

The trailer gives Cruise a time to shine in the role as Seal with comedic aplomb from the very outset as he crash lands a plane full of cocaine, which also covers his face and bad 80’s haircut, into a suburban neighbourhood but before legging it before he can get caught hands a youngster bags of cocaine to keep quiet – You never saw me. We glimpse Domhnall Gleason as CIA agent Monty Shafer recruiting Seal in a bar before proceeding to get his groove on, on the bonnet of a car as the men’s deal goes from strength. Typical male bravado, womanising and deals galore commence in what promises to be a refreshing role for Cruise, sparkling with fun at its outrageousness.

During the trailer launch event held at the tale of last week, Doug Liman was in London to answer a few questions on American Made, a self-confessed lover of the anti-hero, Liman explained exactly why he wanted to get involved in this story.

“I wasn’t interested in this because this is an important story for history classes, I like anti-heroes and I love this character Barry Seal who was playing the CIA against Pablo Escobar against the White House against the drug enforcement agency. He just had no filter at all. I was drawn to the challenge of the excitement of it all”

Barry Seal was a truly unique character, a chancer more than most, if he saw an opportunity he took it, Liman explained “Barry’s like UPS, he doesn’t care what he is flying, he’s got guns for the CIA, Cocaine for the cartels, he’s just interested in getting it from point A to point B”

Liman went on to state this role for Cruise could be seen as introducing a newcomer, Most filmmakers don’t tend exploit Cruise other than for his action abilities as we are well aware “It is kind of like a newcomer Tom Cruise in American Made, It’s a side of Tom that other filmmakers don’t necessarily chase. I’m particularly interested in that because it’s not something Tom does normally. People think of Tom being this really fearless actor, stuntman – he is always jumping out of aeroplanes. In American Made he done all his own flying in the movie” American Made is released in UK cinemas on 25th August 2017