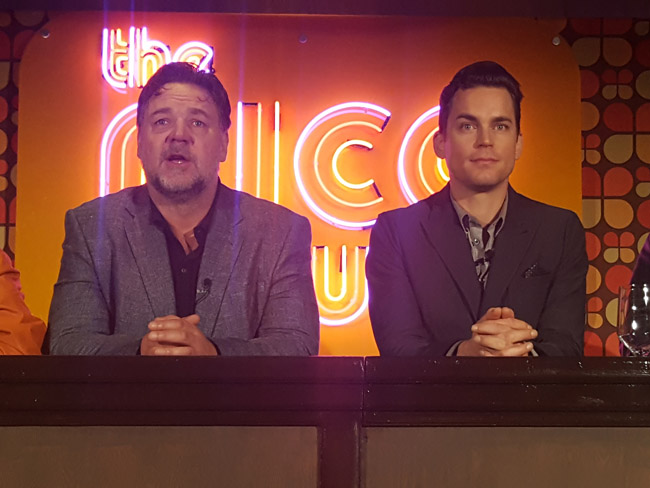 With the cast and crew of the upcoming Shane Black movie The Nice Guys being in London this week for the premiere of the film. We were lucky enough to attend the press conference held for the film which was attended by Director Shane Black, Producer Joel Silver and cast Russell Crowe and Matt Bomer.

With the noticeable absence of one of the films leading men, Ryan Gosling, Russell Crowe immediately won over the room of expectant journalists when he made us all hold up our phones to take a picture as he took one of us to post on twitter.

There is no doubting the amazing chemistry Crowe and Gosling have in this laugh out loud and brilliant film. Crowe said on the chemistry between him and Gosling ‘You can’t manufacture that, you either have it or you don’t. The key to (chemistry), it’s not really that complex, it’s all about listening. If you’re listening to each other, tuned into each other it doesn’t matter what step left step he takes or what improv he decides to do I can go with him because I am listening to him. I don’t anticipate what he is going to do or make any assumptions and it goes both ways. That’s really all you’re seeing is a couple of guys who are very aware the other guy could do anything at any given moment.

Matt Bomer, who plays the film’s murderous villain John Boy and has previously starred in Magic Mike and American Horror Story amongst others had this to say about his character -It’s always fun to paint with different colours and play these kinds of roles you’re not typically sliced as. I’m essentially a fan boy who’s lucky enough to be along for the ride. Shane (Black, the Director) and Joel (Silver, Producer) are a huge part of my cinematic upbringing from my childhood. To watch two of my favourite actors create this incredible symbiotic comedic performance where one doesn’t work without the other. Every take was different it was an incredible education for me. The nature of the film is extremely funny and it couldn’t have been easy to film with all the hilarity on set. Russell Crowe stated If you take the 26 years of making lead roles and feature films prior to The Nice Guys, the amount of time I would have corpsed on camera in that whole time would be less than any given week of shooting The Nice Guys. This little bastard makes me laugh. Sometimes I would suspect he was up all night trying to think of a way to make me laugh. He has (Ryan Gosling) has this natural comedic gift, he’s a funny bastard and I laughed my head off all the time.

The film also see’s the emergence of the young Australian Actress Angourie Rice who plays Gosling’s on screen Daughter Holly, Russell told us about Ryan Goslings work ethic was amazing, making the young actresses auditioning for the part comfortable in the audition process, he researched each of the little girls who were coming in so he had a question he could ask them relating to previous jobs they had done or where they had come from. It’s just another indicator of what he would do to make people feel comfortable.

The Nice Guys is out in UK Cinemas June 3.