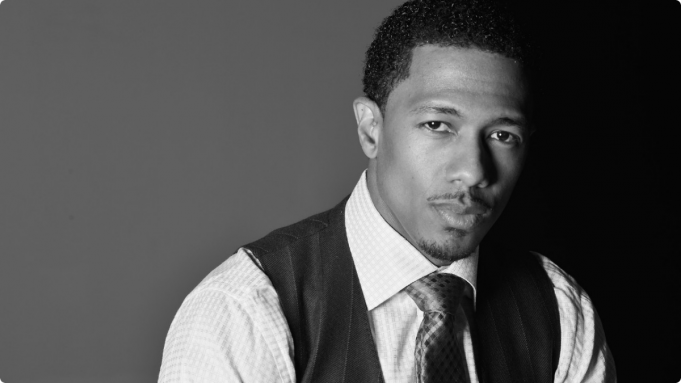 If you love luxury and great views of the London skyline then the Shangri-La Hotel, at The Shard, is a great choice. As Nick Cannon exits the elevator dressed smartly and looking very handsome in a tuxedo, this affluent environment seems a perfect fit.

The 34-year old – who is currently separated from his wife singer Mariah Carey – is in the UK filming for his new NBC series Lifestyles of the Rich and Famous – which is a revival of the 1980s MTV series and is also promoting singer Kreesha Turner, a Canadian-Jamaican artist signed to his label.

So what have you been filming for the show?
We were at Saville Row earlier, then we went to the Eye and then we went to some street where it was the wealthiest street in London with houses that were 20million pounds, just a bunch of stuff. We’re also filming in France.

Why did you want to re-launch this concept?
It was one of those things where I always like my brand kind of fit with it like everything from 2 million dollar shoes to you know just kind of always being the everyday man but still live that extravagant lifestyle and I can come and have some fun with this. (Laughs)

I can’t wait to see it. What else are you working on?
Oh man so many things; I am getting ready to direct my next film so I am excited about that. Music signing artists like Kreesha and producing a bunch of stuff for my label.  Just a lot of TV shows State side.

Tell me about the movie…
It’s a romantic comedy that we start shooting in March so excited about that.

Who’s starring in it?
That is a surprise but it will be a multi-cultural ensemble that we are putting together. Ok amazing – so music wise you are managing Kreesha how did that come about?
Actually you know I was a fan of hers from afar, just the stuff she did in Canada, I knew she was going in a cool direction with the dance song and all that, I was like Yo I want to help her.

Is that the kind of person you are, do you like to help others?
Yeah I feel like I am in a place now in my career where it is really about giving other people opportunities and helping other people out you know I have accomplished everything I kind of wanted to do. So it is good to help the next generation coming up.

You have achieved a lot creatively and as an entrepreneur. What kind of advice can you give to someone who would like to be as successful as you?
Its funny I call myself an ‘entrepretainer’ just kind of a mix of the entertainment and business mind. It is one of those things that we are blessed with everything going on today age of technology and the accessibility that you can create your own empire you can create your own stardom whether it is content or product whatever it is.

You can get it out there and be your own boss and own producer because everything is right at your fingertips so I would just encourage everyone to continue putting everything into your art and perfecting your craft and putting it out there to the people one person at a time and if it is something good it will stick.

When did you realise everything you wanted and your dreams had come true?
You know what it was early really you know I came from very humble beginnings so even the opportunity to be in this field and to be able to be creative I was happy with that. When you put points on the board and you get successes it is like oh wow alright now too much is given and required and you have just got to get out there and kind of give back and create that cycle.

The more good I do for others and the hands that I help up I will be reaching for tomorrow you know what I am saying? So it is this idea of kind of trying to reciprocate whoever looked out for me and paying forward in that sense. With all your ventures and the recent separation how do you manage to juggle that alongside fatherhood?
You know what family is number one, I am a father first and foremost that is a number one priority and you know even everything I do or whatever I am building is kind of linage or whatever it is I do or generating income or just the way I present myself it is always for the benefit of my children you know, and knowing that I have people that I am responsible for. That is the first thing that comes to mymind no matter what’s going on with anything else.

What on your children’s Christmas list?
They just like opening stuff, they don’t really care as long as it is colourful and is wrapping paper so it will obviously be a bunch of toys and candy and all of that good stuff.

When you were a child what did you want to do?
It has always been an entertainer, that is all I wanted to be, I always wanted attention and entertainment helps you get attention.

What angers you about society today?
Man that is a good question just negativity in general especially when it is perpetuated through our youth you know what I mean – we kind of pass that on. If you think about it young people are such empty vessels that we can fill with amazing things but society continues to perpetuate these minds to leave in this energy of constant negativity and feeding off just ill will and I wish we could kind of reconstruct and reconfigure that mindset of hey be happy for one another and position love in the right way.

Definitely and with social media people have instance access to say negative things to you directly – as well as positive. How do you feel about that?
I am a comedian so I understand where something is funny if you are joshing or jesting with somebody but if you are trying to hurt someone I don’t understand the purpose. People always want to tear each other down to build themselves up but you don’t really need to do that. You can build yourself up without tearing someone else down”

How do you deal with that – say on twitter someone is coming at you…
I welcome that because I have very thick skin but I hate to see other people bullied, I have been on the board for an anti bullying campaign and I think its sad. I really want to help build peoples self esteem and encourage them because you are always going to be faced with a bully at some point in your life if you don’t know how to deal with it and you are fragile that can be detrimental so it is like almost instead of trying to do away with the bullying it is almost like you have to build these spirits up with positivity.

Negativity is going to come it is kind of inevitable you can’t get rid of it but you can say fight a negative with a positive definitely.

What other charities that you are involved with?
The Lupus Foundation, the National Kidney Foundation, literacy programs, education…so many different things.

Is there any in particular that are really dear to you for one reason?
The lupus foundation is something near because 2012 I was diagnosis with lupus so something like that is always close. It’s an auto immune disease that effects everyone differently its tough and people don’t understand how tough it can be. Also anything that has to do with youths. I have been an advocator of youth and empowerment so those are probably the ones.

Who or what inspires you?
So much inspires me, right now my children inspire me more than anything. I am constantly inspired by young artists and everything that young people are doing it really keeps me energised because they are creative and I never want to lose my sense of creativity.

They inspire you but you also inspire them. They probably see you as a role model – do you see yourself as one?
I always tell people ‘I am not a role model, I am a real model’ – a role is something you play, and when it comes to being who I am I am a real person so I will make some mistakes people don’t agree with, I am going to do some things people will agree with but I will always be real and always be true to myself “

What is success to you?
Success is a journey; you know it is not a destination. Just to be able to wake up each day and be happy and keep striving for happiness that is your destiny. From your Real Husbands of Hollywood colleagues if you could swap bodies with anyone for 24hrs who would it be and why?
Probably Kevin Hart because I want to know what it is like to not be able to get on a roller coaster and to just be mad and short (laughs)

What other business ventures are you working on?
Right now I’m getting ready to open up the WildnOut sports bar and comedy club. I’ve just launched incredible motor sports so those are businesses that I am excited about. I am looking to do wild and out UK, we did 10 years in the states with this so it is probably time to bring this to the UK and get some UK comedians going.

Sounds great. The UK camp would love it. What has been your worse ever comedy experience?
Opening up for Dave Chapelle one time, it was like 2004 yeah 2004 and it was such a rowdy crowd and I went out there and like Dave Chapelle show he used to make fun – he had this skit where his son would be like Nick Cannon is hilarious and the son be like fuck Nick Cannon and before I could even get a joke out on stage the audience was like fuck Nick Cannon I was like great this isn’t going to work, but it was cool. When Dave when out he said? Bitch the whole time, so it was what it was.

You sound busy with all the different ventures but if you did have downtime are you dating and  what kind of qualities would you look for in a lady?
Right now because that is not my focus – I don’t know it would probably be someone who was really understanding about my schedule and thought process and kind of content with allowing me to be me and work through my space as opposed to like someone I don’t have to necessarily have to answer to or feel contrived or anything that will formulate. I want someone who will understand let’s just go with the flow and enjoy each other. If that is possible.