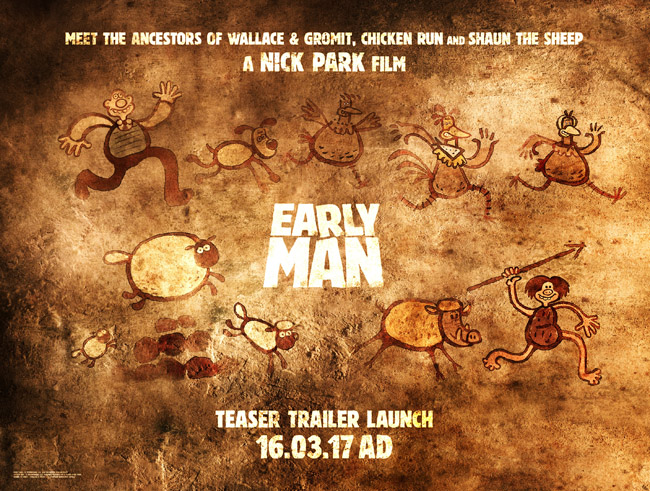 Not only that but they have also revealed a whole host of British comedy talent will be joining Eddie Redmayne, Tom Hiddleston and Maisie Williams on the cast list such as; Timothy Spall as Chief Bobnar and “The Tribe” played by Richard Ayoade as Treebor, Selina Griffiths as Magma, Johnny Vegas as Asbo (quite a fitting name there), Mark Williams as Barry, Gina Yashere as Gravelle and Simon Greenall as Eemak.

Nick Park commented  “Today we get to meet Dug’s tribe, a lovable bunch of misfits voiced by some exceptional British talent. They’re essentially a group of inept cavemen and women including Treebor, played by Richard Ayoade, a gentle giant scared of his own shadow; Magma, Treebor’s no-nonsense mother voiced by Selena Griffiths and Mark Williams as Barry, whose best friend is a rock. Chief Bobnar, voiced by the brilliant Timothy Spall, leads the pack as their long-suffering leader, and father figure to his tribe of idiotic brutes.”

EARLY MAN is the new prehistoric comedy adventure from four-time Academy Award-winning director Nick Park and AARDMAN, the creators of WALLACE AND GROMIT and SHAUN THE SHEEP. Shot in Aardman’s own distinctive style, the film will take audiences on an extraordinary journey into an exciting new world unleashing an unforgettable tribe of unique and funny new characters voiced by an all-star British cast.

Set at the dawn of time, when prehistoric creatures roamed the earth, EARLY MAN tells the story of courageous caveman hero Dug (EDDIE REDMAYNE) and his best friend Hognob as they unite his tribe against a mighty enemy Lord Nooth (TOM HIDDLESTON) and his Bronze Age City to save their home.

EARLY MAN is released in UK cinemas on January 26th 2018