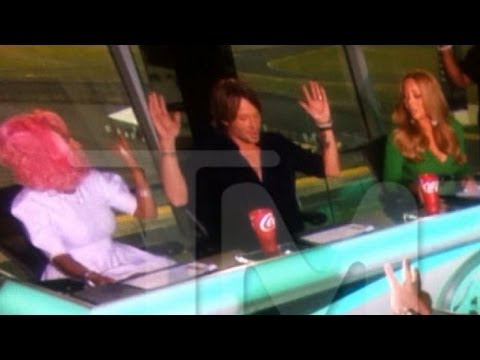 Though they may have dismissed claims of any hostility, it has emerged that the bond between American Idol judges Nicki Minaj and Mariah Carey has officially hit rock bottom.

Show producers were forced to abandon auditions in North Carolina on Tuesday after Nicki launched a verbal attack, saying she was sick of her co-star’s ‘f****** highness’. In video footage obtained by TMZ, the heated disagreement also heard the rapper saying: ‘I’m gonna knock you out’.

According to sources, Nicki then walked off of set because Mariah kept making jabs at her. Nicki’s team convinced her to return back to the show, whilst Mariah apparently kept adding fuel to the fire by calling the Young Money rapper a ‘bi*ch’ before later proceeding to curse her out.

Are you team Mariah or team Minaj?

Check out the below footage of Nicki’s meltdown during the American Idol auditions.