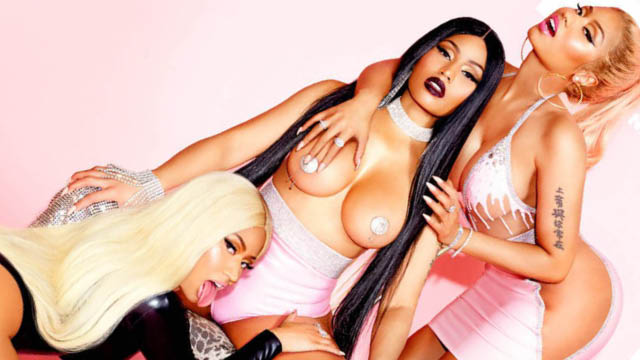 Aptly titled MINAJ À TROIS, Nicki Minaj tries to ‘Break The Internet’ on the cover of Paper Magazine with this racy NSFW cover shoot, featuring Nicki Minaj not once, not twice, but three times… I think I just jizzed my pants!

Photographed by world-renowned Ellen von Unwerth, Nicki Minaj poses seductively on the cover of Paper Magazine. One image see’s Nicki Minaj on her knees, face down, ass up, with her tongue sticking out looking like she is about to errrr… lick her other self. Yikes!

The other Nicki is seated topless and wearing pasties on her breasts, while the third Nicki has a blonde ponytail and leans over and grabs her breast… This is getting all too much for me.

So what’s with the whole ‘Break The Internet’ theme? Well, back in 2014, Kim Kardashian posed for Paper Magazine as she stripped completely nude on the cover. The image went viral within minutes of being released and the whole www was talking about it. Kim Kardashian liked Minaj’s photo and commented with three fire emojis.