Air Max Day comes after the launch of the Nike Air Max 1 which was first released back in 1987 when visible Air was officially born.

Over the past few years, Nike’s dropped fresh silhouettes, celebrated sustainability and loads more in honour of Air Max Day. In 2021, it’s all about the Air VaporMax Evo, which combines design details from some of the most iconic Air Max trainers to date. Coming as Nike’s latest innovation, these trainers borrow design elements from not one, or two but seven different Air Max trainers – spanning the ‘90s to now!

First dropping back in ’90, the now-iconic Air Max 90 was an evolution of the ’87 Air Max. Designed by Tinker Hatfield, the Air Max 90 has been in the game for over three decades, celebrating its 30th anniversary last year! The Air VaporMax Evo sports overlays inspired by the Air Max 90.

Just three years later, Hatfield worked on the Air Max 93. The 93 was designed to be an artistic celebration Air with a 270-degree Air unit in the heel. The logos to the tongue and heel of the Evo nod to the Air Max 93, while combining details from all 7 Air Max styles – spanning the ‘90s to now.

Closely following the launch of the Air Max 95, Nike dropped the Air Max 96 II in ’96 and ’97. With an edgier look, these trainers incorporated Air Max tech in a honeycomb construction. On the VaporMax Evo, caging at the front of the midfoot nods to the Air Max 96 II. 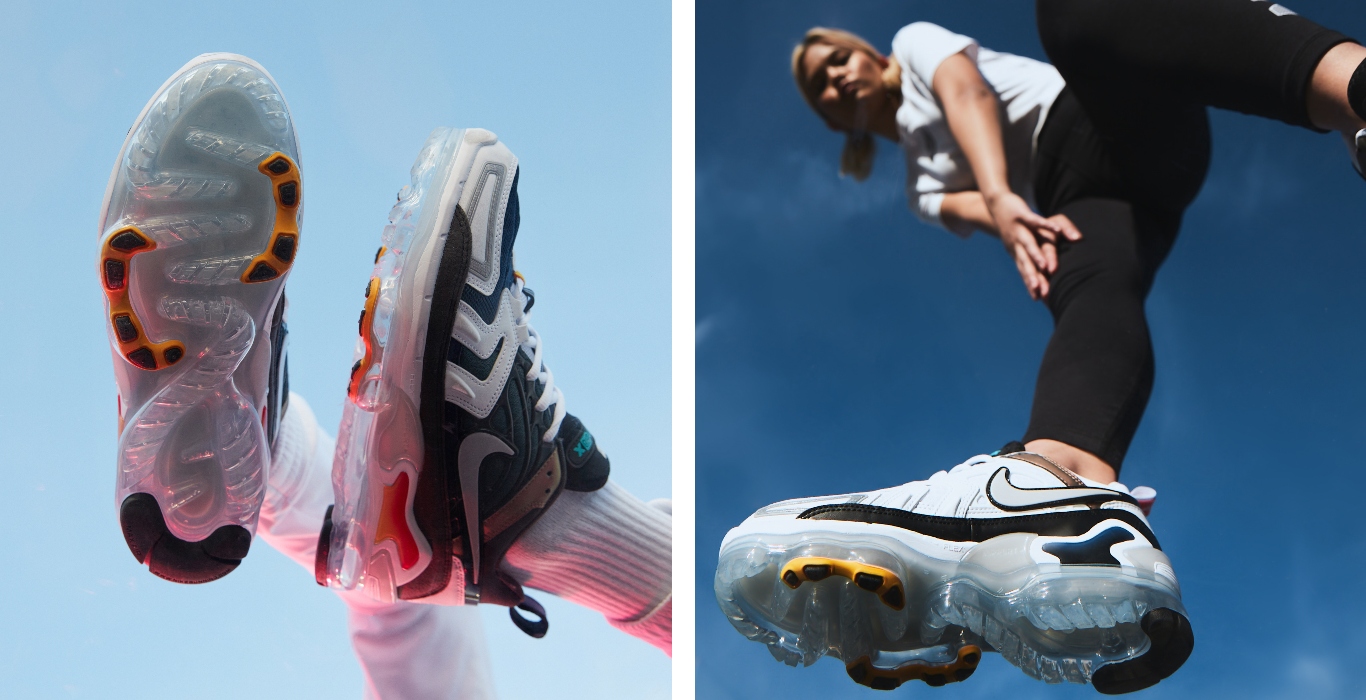 By ’98, Nike introduced Tuned Air to their running shoes. This was first seen on the Air Max Plus, which evolved to become just as at home on the streets as it was the track. For extra support, the Evo borrows the iconic ‘Whale Tail’ shank from the Air Max Plus.

Showcasing superior innovation back in ’99, the Nike Tuned Max was the cornerstone of the Alpha Project. These sneakers offered dynamic cushioning, specifically tuned for a runner’s bodyweight. Throwing it back to ‘99, the Air VaporMax Evo takes cues from the Tuned Max with a midfoot cage for support.

Nike’s Air Max meets no-sew tech with the Air Max Solas in 2005. Offering full-length impact protection, these runners were built without seams for maximum comfort and a sock-like fit. On Nike’s latest innovation, the Evo, the midsole tip is inspired by the Solas.