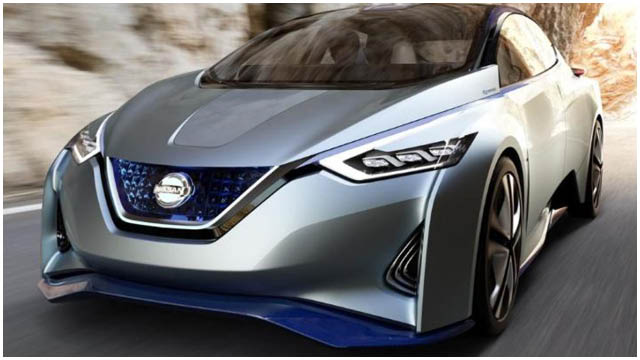 Hands up those of you who would love to be chauffeured around the city. And keep your hand up if you’d love the vehicle to be a fully-functional and self-sufficient robot car.

Thanks to Nissan and their IDS Concept, it appears those dreams can now become a reality. Looking something like Transformers-meets-Tron, the IDS Concept is an electric car with both manual and ‘autopilot’ driving modes available, meaning the driver can essentially be a passenger in their own car.

The IDS Concept is a sight to behold not just for its stunning looks, but also its interior beauty. In the car’s automated mode, the steering wheel will retract into the dashboard, pedals will shift out of the way, and seating will rearrange into a more lounge-style, so passengers can talk to each other far more easily.

Similarly with Microsoft’s Cortana or Apple’s Siri, Nissan’s IDS Concept is given a playful and fun virtual personality to engage with, that can be communicated with via speech or hand gestures. The car’s character can talk via a dash-mounted scrolling LED screen, which can also update the driver with weather changes, traffic conditions, and appointment reminders.

As for what makes the car so smart to be driverless, there is understandably a lot of incredible technology for this to happen. 12 hidden cameras, five radars and five laser scanners are positioned around the IDS Concept, making it aware of upcoming hazards that may not even be perceptible to humans. There is additionally the option of a HUD display on the windshield in manual mode, to assist with recommended driving lines.

Despite Nissan’s vision of the IDS Concept and their popular LEAF electric car, petrol car sales saw a big rise in the UK in September, and traditional car part retailers like these are still as essential as ever in 2015. With that in mind, Nissan thinks it’s doubtful that we’ll see the IDS Concept in production before 2020, yet some form of radar, camera, or laser tech from the concept car will likely see its way into upcoming models in the meantime.

“By the time Nissan Intelligent Driving technology is available on production cars, EVs (electric vehicles) will be able to go great distances on a single charge,” says Mitsunori Morita, Nissan’s design director. “Getting to this point will, of course, require the further evolution of batteries, but aerodynamic performance is also very important. We incorporated our most advanced aerodynamic technology in the design of the Nissan IDS Concept.”

Pimping your ride is one thing, but pimping your life with a car like this is a different matter altogether. Take a look at a promotional video for the Nissan IDS Concept below.