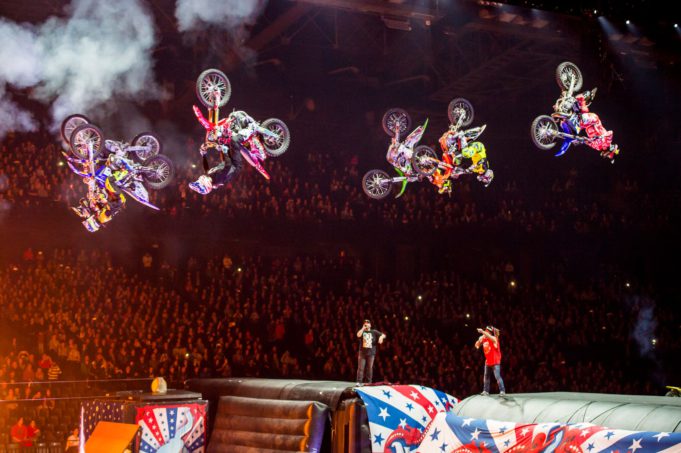 Direct from sell-out shows across the globe, the world’s greatest action sports show, Travis Pastrana’s Nitro Circus Live is coming to UK and Ireland. Featuring 30 of the world’s best extreme athletes in freestyle motocross, BMX and anything you can imagine with wheels!

Plus a host of ridiculous contraptions being launched 40ft into the air, by the crazy Nitro daredevils.Expect to see the world’s biggest and most dangerous stunts, in a fully choreographed, actions sports, theatrical spectacular! Europe, do not miss this once in a lifetime opportunity to see the biggest action and extreme sports tour on the planet. Nitro Circus’ biggest moments, and some of its most notorious stacks, have come from the mind of action sports icon Travis Pastrana. The Nitro Circus ringleader has an uncanny ability to encourage the best riders on the planet to go big or go home… In some cases despite their better judgment! With the all-new You Got This Tour, who knows what’s gonna happen! Watch Travis and company ramp up the shenanigans with the greatest, stupidest, funniest show in Nitro history.

Expect bigger, brand-new ramps, even crazier stunts and so much more.

“Nitro Circus is turning me loose!” Travis explains. “I’m throwing all of my best, and worst, ideas into one incredible two-hour show. Everything I’ve ever wanted to see live, we’re taking on the road. Expect bigger, brand-new ramps, even crazier stunts and so much more. It’s going to be unreal. Look out, though. There might be a few rough landings.”

Nitro Circus: You Got This Tour will feature the best athletes in FMX, BMX, Scooter and Inline, including multiple X Games medalists and several Nitro World Games champions. Travis Pastrana will both lead this all-star international roster and challenge it to push the envelope in true Nitro high-risk, high-reward fashion. With all this plus a slew of new outrageous contraptions and more, You Got This is the Nitro Circus show you’ve been waiting for.

Get your tickets for NITRO CIRCUS UK NOW