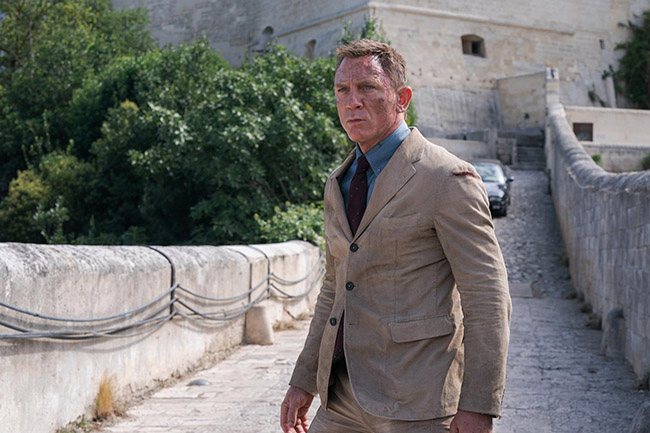 After a couple of false starts due to some kind of pandemic, Daniel Craig’s final outing as the seminal James Bond in No Time To Die is finally upon us, and boy what a way to go out.

Taking on Phoebe Waller-Bridge as one of the writers alongside Neal Purvis and Robert Wade for the Craig series has had a deeper impact than one would expect, one that tones down the villainy and action leaving room for Bond’s humanity to evolve with a surprise or two before he gets his rather explosive send-off.

Starting off with a fantastical prelude with a traumatic event in the childhood of Dr Madeleine Swann (Lea Séydoux) to lay the foundation of the intermingling story of this rose-tinted spectacle, we join up with Bond, no longer in service at MI6, enjoying an idyllic retirement with Dr Swann lovingly at his side before the staple shit hits the fan. The former British Intelligence agent finds himself in an action fuelled fight for his life that includes jumping from a bridge holding onto a rope with the one hand, naturally.

Having been persuaded to take on a freelance job by old friend Felix Leiter (Jeffrey Wright) and a preppy new state department appointee Logan Ash (Billy Magnussen), Bond finds himself embroiled in a sticky situation that involves biowarfare, one that has been unwittingly created under the guidance of MI6’s M (Ralph Fiennes). This little setback sees this story get 2 villains for the price of one, which ties off previous storylines from the Craig timeline. Christoph Waltz returns as Blofeld, although locked up in a high-security prison, he still has a powerful eye for causing mayhem. Villain number 2 comes from the underused but creepy facially disfigured Rami Malek’s Safin. Both men have a really unhealthy obsession with Mr Bond.

The female protagonists elevate the stakes in the humour department, highlighting the fact of how self-aware this series has been in showing up the misogynistic treatment of Bond’s women. Ana de Armas briefly teams up with Bond, on the surface she’s a wide-eyed sexy, giggling dumb brunette but when Bond finds himself in a confined room having to undress in front of her, he can’t help his flirtation only for her to flat out turn him down.  Then there is the slickly fierce Lashana Lynch, having taken over the 007 mantle on Bond’s retirement, giving our ageing womaniser a run for his money on so many levels.

With any Bond film, there is always a level of absurdity wrapped up in epic action set-pieces and director Cary Fukunaga has stayed faithful to its core aesthetic, but even with 2 antagonists to work with, the spotlight very much remains steadfast on the departing Bond. The franchise has never stuck by the continuation formula but this gives scope to the very possibility it could become written into the fabric of its core if Bond carries on evolving for the 21st Century. No Time to Die gives Daniel Craig’s Bond a very human heartfelt goodbye.

No Time To Die hits cinemas on September 30th.