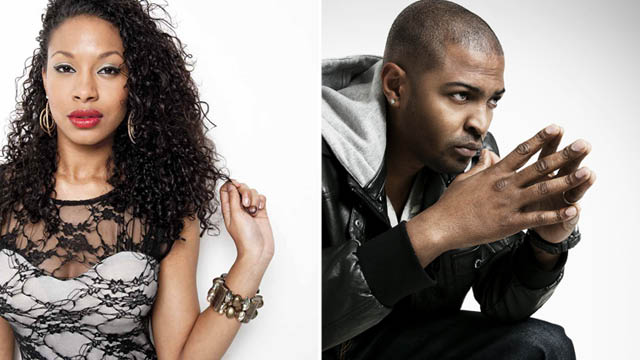 Award-winning actor, screenwriter and director Noel Clarke is set to cause a storm with his latest offering, heist movie 4.3.2.1.

We get the lowdown on this new British film from the man himself and one of his female leads, the ever-engaging Shanika Warren-Markland

With his 2008 directorial debut Adulthood grossing over £3 million at the UK box office, Noel Clarke has come a long way from his humble West London beginnings to realise his big screen dreams. From acting roles on TV shows such as the revived Auf Wiedersehen Pet, Doctor Who and The Bill, he’s already got a BAFTA under his belt (he won the ‘Rising Star’ category last year), and 4.3.2.1, the second feature film he has helmed, is set to raise his profile even more. Set in both London and New York, 4.3.2.1 stars ex-EastEnders star Michelle Ryan, rapper and actress Eve, Julia Robert’s niece Emma Roberts and Adulthood’s Adam Deacon and Shanika Warren-Markland. Flavour sat down with Noel and Shanika to discuss the forthcoming film and how they have both grown since Adulthood…

Tell us about 4.3.2.1 and the characters you both play.
Noel: Without giving too much away, four girls get involved in a diamond heist and have to navigate through it in a three-day period. I play T, a supermarket supervisor who is mixed up in the heist.
Shanika: I play Kerrys Jauo-Pinto and she is the tough one of the friends, very feisty and strong. Kerrys doesn’t wear much at all. She’s all about the revealing clothes – not because she’s a slut but because she can and because she doesn’t care what anyone thinks of her. She’s confrontational, in your face and very cheeky but also funny and loyal. It was great to read a script for a British film with four female leads.

Kerrys is quite an aggressive character. Do youshare any similarities?
Shanika: I mean I can stand up for myself but Kerrys is a lot more confrontational and demanding and a lot braver! It’s fun to play someone different to yourself and now whenever I’m scared of something I just think ‘How would Kerrys do this?’ She’s quite fearless which is admirable. I think Kerrys is one of those impulsive people that do things like getting tattoos without thinking. Yes, Kerrys does have quite a few tattoos. Arethey real?
Shanika: No. The tattoos in the film are mostly fake! They were transfers that were applied in make-up every day. The one on my hip is real, however. It says ‘Ad astra per aspera’ which is Latin for ‘To the stars through difficulties’. On the first day that all us four girls filmed together, we discovered Tamsin who played Cassandra wears a T-shirt that has the same phrase on.

You are involved in a few racy scenes. How difficult was it taking your clothes off for the camera, and is it something you feel is necessary for an actor to do?
Shanika: The sex scenes were nerve-wracking but only because I’d never done one before! It was a closed set and obviously all the crew were really professional so there were no worries there, and my co-star Susannah was lovely. We had rehearsals together and had really worked on our characters and relationship so we were comfortable and looked after each other on set. When it comes to acting I’m a realist. I think some sex scenes can be gratuitous and unnecessary but if it’s important for the story then I support it. People have sex in real life so if a film is depicting real life it stands to reason people are going to have sex! The fact that Kerry was bisexual and had a female partner was not an issue for me at all, and I think for most people my age nowadays sexuality is no big deal.
Noel: Also, I make sure I protect my actors – I don’t show any private areas. Essentially there looks like there is nudity in the film when actually there is none. European cinema does it all the time and no one bats an eyelid. I think there is definitely a line and if I had it my way I’d make it a lot racier – but I’m trying to get a certain rating… [Laughs] This film is noticeably different from the KiDULTHOOD/Adulthood movies. Did you make a conscious effort to steer clear from the typical “hood” film?
Noel: I wanted to do something different and not just write another hood film like what I’ve done before so people couldn’t say ‘Noel just does that and that.’ I wanted to write something that wasn’t being done in this country. I had a meeting after Kidulthood where a guy said me that the girls in the film were very negative, that he doesn’t know any girls who behave like that and that he didn’t think my film spoke to women. So instead of getting mad and smashing up my office, I went home and started writing about these four girls…

Shanika: it’s quite different to Noel’s other films but it is still very London, which I love. It’s definitely a celebration of female friendship. All four girls are dealing with their individual issues and relationships, which comes through as the story unfolds. US Rapper Eve also stars… How did you manage to get her involved in this project?
Noel: Basically we just asked her! I’ve been a fan of her music for many years so it was great to have her on board.

There were a few cameos from your previous film Adulthood in which you also starred. Are you all close friends?
Shanika: I’m definitely still good friends with a lot of the people who worked on Adulthood, so it was great to work with Adam, Femi, Arnold and Ashley on 4.3.2.1. Working on a new film set can be daunting, so it was lovely on the days they were in, like working with family. We all get on so well and are constantly in touch. We meet up socially all the time and support each other if one of us is performing somewhere.
Noel: Kevin Smith, Adam Deacon, Arnold Oceng and Shanika are all actors that I have had faith in from back in the day, and still have faith in. We’re like a little family. If they need anything I support them and if I’m doing a project and need anything they support me and that’s what the UK industry is lacking.

After the success of your directorial debut Adulthood and winning a BAFTA, do you feel under pressure to outdo yourself?
Noel: No not really. I’ve just got to do what I do. You can’t live your life thinking you got to live up to the pressure or the hype. I mean it’s done. The day after I won [the BAFTA] it was over, and so now I’ve just got to focus on what I do.

Are you worried that you may alienate your current fans who are used to the “hood”-type films you are best known for?
Noel: I’m not concerned about that as they don’t pay my bills, to be honest. But it’s not even about that for me. I feel personally that if people want to make films about stabbing and shooting and hood life that’s fine – I’ve done it twice. So if that means that some people are going to feel alienated because I want to do something different and progress my career, then so be it. But I’m not trying to alienate anyone. I’m hoping that they will see this film and come on the journey with me and understand that what this film is actually doing, is broadening their horizons. Just like KiDULTHOOD changed the way cinema was over here in terms of the type of films that people were making, 4.3.2.1 is a gear change. It’s me saying ‘OK everyone else is doing that, let me do something different.’